Kim drew inspiration from her childhood in New York City and the Nineties for the apparel and sneaker collection.

Nike continues its focus on women’s footwear with a new collaboration collection with Olivia Kim.

Kim, who serves as Nordstrom’s vice president of creative projects, designed a limited-edition Nike Cortez for the sportswear giant in 2017 and adds five more styles with this partnership.

The 16-piece collection, which will retail between $32 and $240, is inspired by Kim’s childhood in New York City, more specifically Manhattan, and includes a sporty assortment of short- and long-sleeve graphic T-shirts featuring the Nike Swoosh logo, peace sign and a gradient red, green and yellow Air Max 98 sneaker that was inspired by Jamaican culture and dance-hall music. The apparel offering is rounded out by a fleece hoodie, puffer coat, padded sports bra, tennis dress, fanny pack and beanie accessories.

The Air Max 98 sneaker is joined by four additional sneaker silhouettes in Nineties-inspired colorways, including the Air Force 1 with 1996 ivory snakeskin Swoosh; the running-hiking hybrid Air Mowabb that was released in 1991; Air Footscape that references the original release in 1996 but with a zebra print, and “Black Cat” Air Jordan IV that released in the early Aughts and was recently teased a few weeks ago.

The collection is also supported by a colorful and psychedelic campaign fronted by Kim, 2019 FIFA World Player of the Year Megan Rapinoe, model Binx Walton and director and writer John Waters. 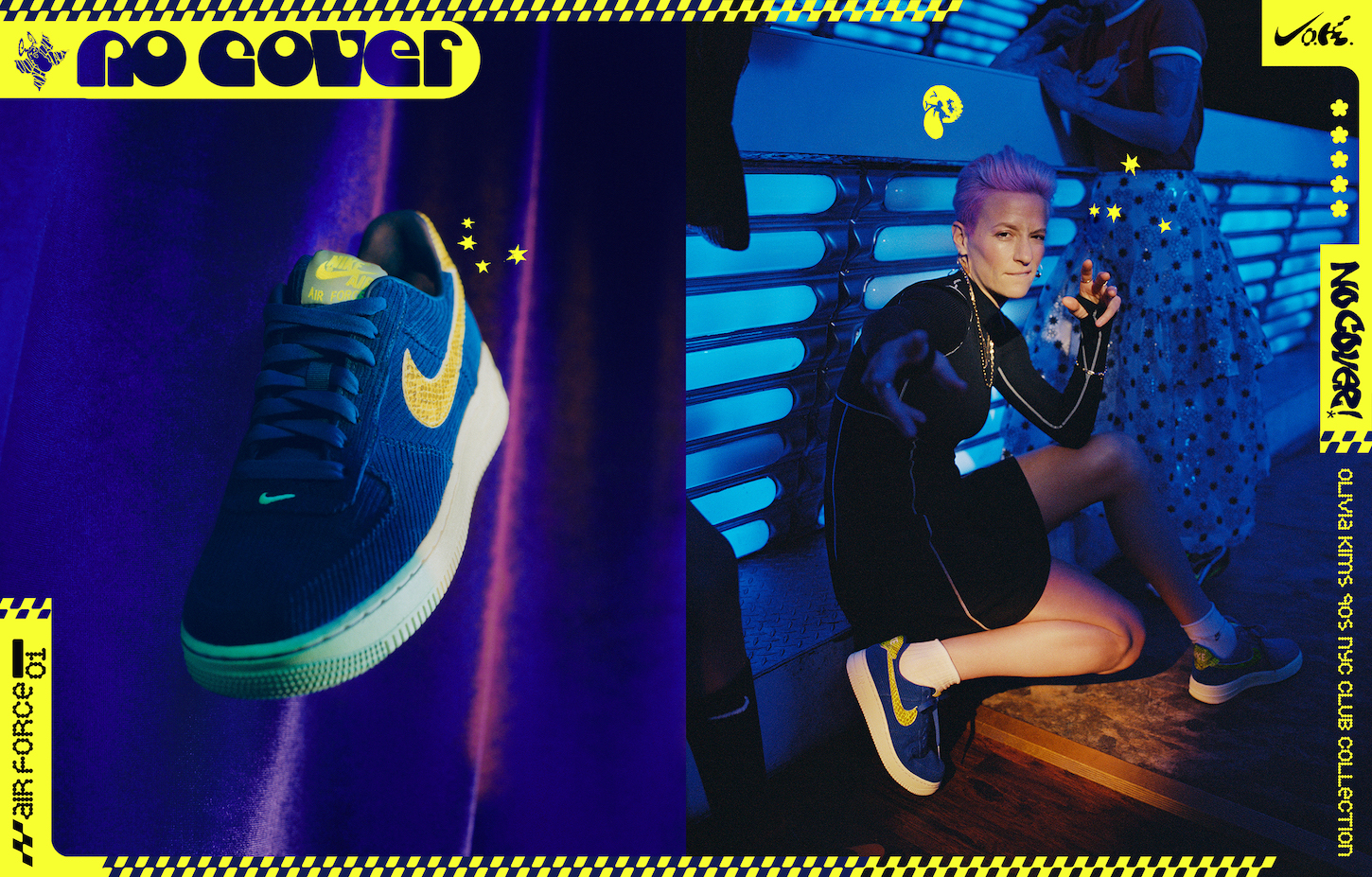 Wedbush analyst Christopher Svezia said in July that Nike’s women’s business saw a double-digit increase for the back half of the last fiscal year that ended in May 2019. Last year, Nike launched partnerships with Martine Rose, Sarah Andelman and Yoon Ahn, a collection with Vogue and created an Unlaced concept shop. This year, Jordan and Aleali May released Air Jordan VI sneakers, and Nike dropped its collaboration collection with Sacai that was eclipsed by the hype-fueled LD Waffle and Blazer sneakers.

Nike Inc. chairman, ceo and president Mark Parker said in September at the Nike annual meeting, “We are underpenetrated in the women’s side of our business,” Parker said. “The upside there, through the power of innovation, is actually quite tremendous.”

The Nike x Olivia Kim collection will launch on Oct. 31 at Nordstrom’s new women’s store in New York City, which opens on the 24th, as well as its men’s store across the street, and other Nordstrom stores in Seattle, Chicago, Toronto and Vancouver as well as online at a NXN web site and Nike’s Snkrs app. Global retailers will start to carry the collection on Nov. 8.