Nike is getting artistic for Earth Day thanks to a collaboration with artist Steven Harrington.

The sports giant teamed with the Los Angeles-based painter to create a capsule collection intended to inspire love for the planet. Harrington is best known for his colorful California-inspired psychedelic pop works that often include dog and palm tree characters, an aesthetic he transferred to three Nike footwear models.

The Nike Flyleather by Steven Harrington collection includes an Air Force 1, a Blazer and a Cortez, each of which were created using Nike Flyleather, a proprietary sustainable material that uses at least 50 percent recycled leather.

Harrington said Nike reached out to him about a year ago to see if he’d be interested in working on the project, “and when it hit my desk, I was so excited,” he said. “I’m such a fan of the brand and the topic itself.”

Although he has worked with Nike in the past, the “different scope” of this project, and its overriding message about sustainability really hit home.

Harrington admitted that translating his art to footwear required a different mind-set. “In the initial concepting and talking with the designers within Nike,” he said, “I took the notion of footwear completely out of my brain. Working with footwear is a really tricky thing, especially when it’s Nike, which sets a high bar.” 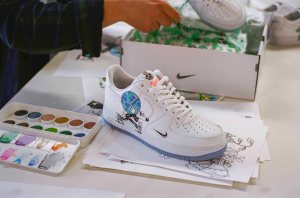 Nike Flyleather is made from at least 50 percent recycled leather.

But he’s pleased with the end result and the opportunity to work with Flyleather. The material preserves the look, feel and smell of leather but takes a lot fewer chemicals and energy to produce. In typical leather manufacturing, a lot of scrap is discarded that ends up in landfills. Flyleather takes those scraps, combines them with synthetic fibers and a fabric infrastructure and uses a hydro process that fuses it into one material that can then be finished. 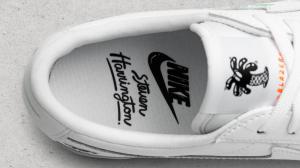 A piece from the Nike Flyleather by Steven Harrington collection.

The collection was previewed in Los Angeles on Friday in advance of Harrington’s new exhibition opening, Magic Hour, on Saturday, April 13. Magic Hour features two paintings that together create a mural-like piece 16-feet long by 8-feet high, along with a series of 5-foot-by-5-foot paintings, his largest works exhibited to date.

Harrington said the inspiration for the exhibit were the colors and textures he experienced during walks with his wife through his Los Angeles neighborhood at dusk, or what he calls the magic hour.

The exhibition will run through April 21 at 670 S. Anderson Street in Los Angeles. The gallery will also have a limited quantity of the shoes for sale.