The limited edition of 89 pairs is to raise awareness of the fight against Parkinson's disease. 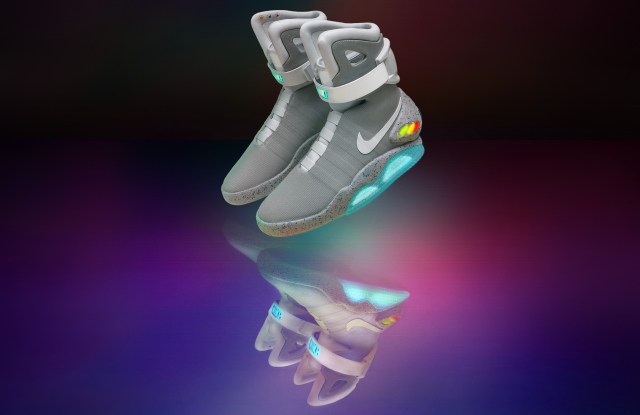 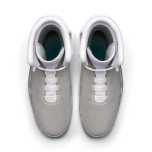 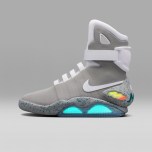 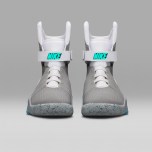 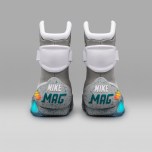 Nike and the Michael J. Fox Foundation have released a limited edition of the Nike Mag.

Michael J. Fox wore the original version on the silver screen in “Back to the Future,” making the Nike Mag a cultural icon. The limited edition release of only 89 pairs — representing 1989, the year Nike inspired the future with a vision of what footwear could be — is available globally through an online draw. The release of the limited edition Nike Mag is to raise awareness of the fight against Parkinson’s disease, which Fox suffers from, and the foundation’s efforts to speed a cure. The Nike Mag was created nearly 30 years ago, and is an individually responsive shoe that senses the wearer and adapts on its own.

Nike first partnered with the Michael J. Fox Foundation for Parkinson’s Research in 2011. A version of the shoe was built for the foundation and auctioned, raising nearly $10 million in 10 days, 100 percent of which went to fund critical Parkinson’s research.

Mark Parker, chairman, president and chief executive officer of Nike, said, “Though it initially shared only a few seconds of screen time with Michael, the idea behind the Nike Mag unlocked something much bigger at Nike.”

Parker said the Nike Mag “sent us down an unchartered path of innovation, but it also opened our eyes to our ability to fight some of the world’s biggest challenges. We fell privileged for the opportunity to raise even more awareness for the fight against Parkinson’s.”

The majority of the 89 pairs will be available to residents of the U.S. and Canada through a digital draw process. That process can be accessed at nike.com/mag or Nike+ App. Each entry is granted equal opportunity to win a pair of Nike Mags. Tickets are $10 donations to The Michael J. Fox Foundation. There is no limit to the amount of tickets that can be obtained per individual. According to Nike, the draw will begin on Oct. 4, 2016 and end on Oct. 11, 2016. Winners will be notified on Oct. 17, 2016.

In addition, one pair of the Nike Mag will also be auctioned live in three places: Hong Kong on Oct. 11, 2016; London on Oct. 14 and 17, and New York on Nov. 12 at The Michael J. Fox Foundation’s benefit gala, “A Funny Thing Happened on the Way to Cure Parkinson’s.”

Nike said 100 percent of the proceeds will go to The Michael J. Fox Foundation to help drive critical research to accelerate development for the cure of Parkinson’s disease.

Nike said it took the first step in bringing adaptive footwear into more sports this spring with the introduction of the Nike HyperAdapt 1.0, a performance shoe that automatically laces and fits to the unique shape of each athlete’s foot. It also said that the 2016 Nike Mag combines the archetype invention with the new technologies developed for the HyperAdapt 1.0, with the combination resulting in an individually responsive system called Adaptive Fit that senses the wearer and tightens or loosens accordingly.

About one in 100 people over age 60 will be diagnosed with the disease, second only to Alzheimer’s in prevalence. While classified as a movement disorder, the disease also gives rise to other disabling non-movement-related symptoms, such as depression, cognitive impairment and fatique.

Michael J. Fox founded the Foundation in 2000 after publicly disclosing that he had been diagnosed with the disease at age 29. His stated goal is to find a cure and close the Foundation’s doors.