The three-night pop-up dining venture at The Standard in Hollywood kicked off on Wednesday. 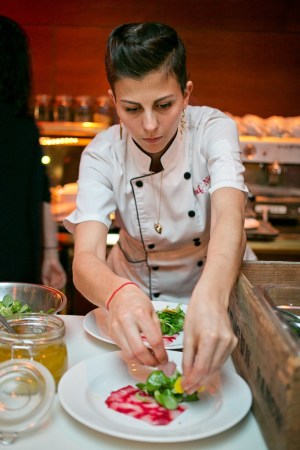 GOOD CLEAN FOOD: Cool kid chefs Nina Clemente and Michael Reed, who met when both worked at Nancy Silverton’s Osteria Mozza, have since gone on to form their own catering companies, Indigo Kid and Root of all Food, respectively, but the two came together for a three-night pop-up dining venture at The Standard in Hollywood that kicked off on Wednesday. The six-course prix fixe feast ($85) features locally grown and sustainable ingredients from farms like One Gun Ranch in Malibu. The menu is vegetable-heavy but features a wild sea bass crudo cured with a citrus beet vinaigrette, as well as a strip steak. Just don’t expect too much butter or cream. “We went to battle over the cream,” laughed Reed, who created a sunchoke soup that calls for the ingredient. “This is L.A., and our clients can be finicky, but we also have to stay true to ourselves,” allowed Clemente. Those foodie friends dining include Tracee Ellis Ross, Liz Goldwyn, Shiva Rose, Marisa Tomei, Michael and Max Chow, PC Valmorbida and Anna Getty. “Michael and I hope that we can continue to do things like this every three or four months. It could be the beginning of a great movement,” said Clemente, who formed the Reclaim Real Food campaign with Tomei and Rose when the three made a PSA calling for voters to support California Proposition 37, which would have required foods to label genetically modified ingredients. The bill didn’t pass, but the Just Label It campaign is one of the event’s beneficiaries, as well as Garden School Foundation, which creates working gardens in public schools. Said Clemente: “We’re like the responsible chefs.”