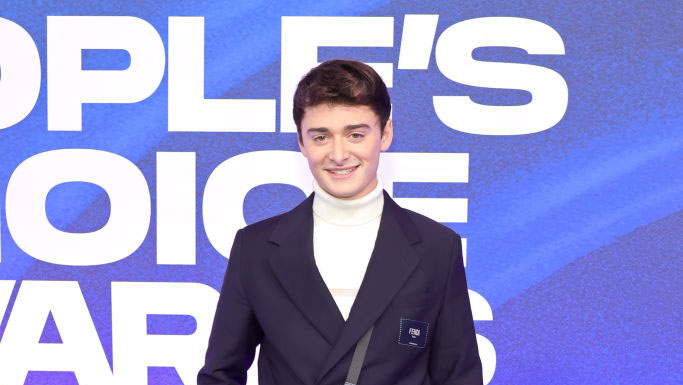 Noah Schnapp arrived on the red carpet for the 2022 People’s Choice Awards on Tuesday in Santa Monica, California, suited up for an award-winning night.

For the event, where the actor took home the People’s Choice Award for Male TV Star of 2022 for his work on Netflix’s “Stranger Things,” he wore a double-breasted navy suit, a white turtleneck, black lace-up shoes and a crossbody bag — all from Fendi.

Schnapp worked with Phillipe Uter to create his look for the event. Uter has also worked with Roselyn Sanchez, Taylor Mack and Meagan Good.

Schnapp is familiar with wearing brands under the LVMH Moët Hennessy Louis Vuitton umbrella on the red carpet. In May, the actor attended the season four premiere of “Stranger Things” in a full Dior look featuring a white shirt, white pants and a blush pink jacket.

“I really had the desire of dressing Noah in a brand that we never used before. Something trendy, cool but still luxury. Noah is between the teenager and adult life so I couldn’t go too classic nor too young. That is why I decided to collaborate with Dior on this appearance,” Uter said to WWD at the premiere.

In addition to “Stranger Things,” this year Schnapp also starred in the mystery film “The Tutor.”

The People’s Choice Awards is an annual awards show where fans honor a year of outstanding pop culture entertainment, with winners chosen by the public. This year’s award show was hosted by comedian Kenan Thompson and awarded Lizzo as the People’s Champion Award and Ryan Reynolds with the People’s Icon award.