The London-based designer has created an immersive experience to launch her new collection. 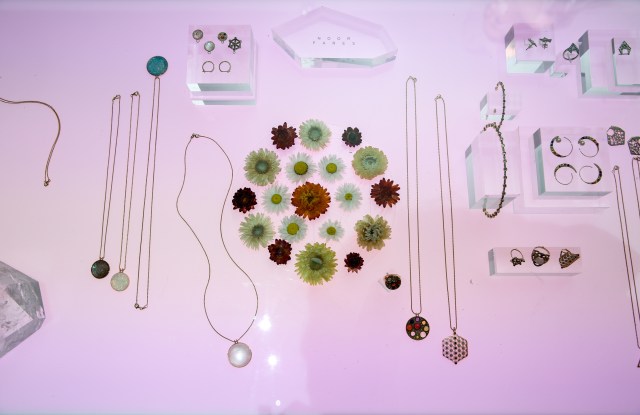 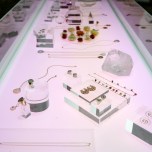 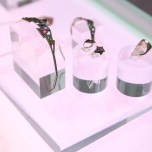 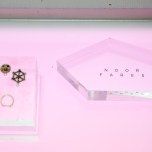 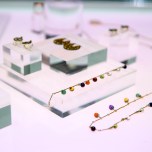 “Akasha,” which means ether in ancient Hindu and symbolizes the intangible, takes the form of a spiritual journey. Fares explored the various healing powers of stones and incorporated different geometric patterns into the jewelry derived from Hindu symbolism.

“Spirituality has always been a personal interest, I do a lot of research, and I’m interested in stones’ different attributes within different cultures. Jewelry is something so personal that narrative becomes a key element in the collection, people almost expect it to have a deeper meaning,” said the Lebanese-born jeweler.

Multicolored stones are arranged into circular-shaped rings and pendants from the collection, which represent mandalas or sacred circles. The designer highlighted that she chose nine stones from the Indian science of healing gems, which are meant to draw the essence of the 9 planets when combined together.

Other pieces incorporate triangular-shaped white topaz stones arranged to face in opposite directions in order to represent the masculine and feminine energies. Fares pointed to a delicate gold choker featuring the triangular topaz stones as one of the most challenging pieces to create. “The stones are cut with thick girdles so they can fit into the gold like a frame,” said the designer who manufactures her collections between India and Italy.

To mark the launch of the new collection, Fares created an immersive experience in the Mayfair art gallery, whose compact rooms and raw design resembles a cave — in order to narrate the journey of the collection through a different dimension, using choreography and sound. There was a wall of flowers shaped in a circle to represent a mandala, dancers performing a tribal-themed dance, a calming soundtrack in the background created in collaboration with a landscape artist and a meditation room.

Following the launch, Fares will utilize the space in the gallery to display “Akasha” alongside items from previous collections for the brand’s first pop-up shop which will run for two weeks.

“I want to open my own store in the long-term because I think it’s important to create a world in which the collection fits, and to curate a retail space that can tell the story of the brand. The pop-up shop will be our first step,” said Fares, who is also planning to launch e-commerce next year.

“A lot of people are becoming more open to buying jewelry online, especially the younger generation, so I think its important to adapt and establish a presence online.”