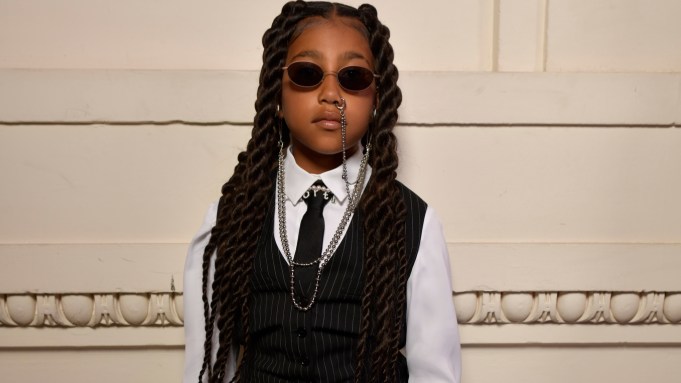 The eldest child of Kim Kardashian and Kanye West has emerged as a style star of the coveted couture week, where she sat front row at Balenciaga and Jean Paul Gaultier, and explored Parisian landmarks, including the Louvre.

Walking side by side with her reality star-turned-entrepreneur mother and Kardashian-Jenner matriarch, Kris Jenner, North West has taken stylish cues from her own parents by wearing pieces from labels such as Balenciaga, Crocs and even Pastelle, her father’s now-defunct brand he founded in 2004.

On Tuesday, West stepped out with her mother to visit the Balenciaga store in Paris where she wore an outfit that paid homage to her father. The nine-year-old was wearing an oversize royal blue varsity jacket from the Pastelle archives. The rapper famously wore the same jacket to the 2008 American Music Awards.

She paired the outfit with chunky black platforms from the Crocs and Balenciaga collaboration, black trousers, rectangular blue shades and a mini black bag from Balenciaga.

Later that night, while dining at the Ferdi restaurant, West wore an oversize black bedazzled denim jacket over a black Balenciaga T-shirt, black trousers and the same Crocs x Balenciaga platforms. She topped off the look with a charm necklace and a pair of black sunglasses to match her mother.

For the Balenciaga couture show Wednesday, West wore a long-sleeve black graphic T by the fashion house paired with ripped black jeans, black sunglasses and the same platform black Crocs. She sat front row with her grandmother, Jenner, while her mother walked the runway as part of the show.

The same day, West and Kardashian quickly changed in time for their appearance at the Jean Paul Gaultier couture show, which was guest designed by Olivier Rousteing, the creative director of Balmain.

The two quickly went viral on social media as fans were quick to notice that the mother-daughter duo’s fashion paid tribute to Gaultier and Madonna’s looks when they walked the runway of an amfAR fashion show in 1992.

Kardashian wore a custom bustier-style dress with a corset top and formfitting pinstripe skirt. The look was a modernized version of Madonna’s breast-bearing one. Meanwhile, West wore a white button-down top with a black tie under a vest pinstripe midi dress paired with mid-calf leather black boots and a matching paper boy hat.

The two wore matching nose rings and black round sunglasses to top it off.

For a visit to the famed Louvre Museum on Thursday, West looked to more outfits from the Crocs and Balenciaga collaboration, wearing the platforms once more and a Croc-inspired black crossbody bag. She also wore black jeans and what looked like a custom Balenciaga hoodie with the words “North” and “Balenciaga” emblazoned on it.