Not So Pretty… Madonna in Italy… Fashion Week Buzz… 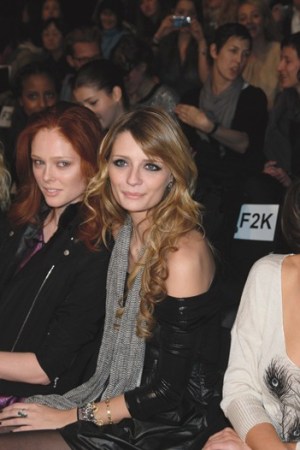 NOT SO PRETTY: “She is sick.” That’s what Karey Burke, executive producer of Mischa Barton’s upcoming “The Beautiful Life,” CW series told WWD on the set of a shoot for the paper on Thursday. Barton had been scheduled for a photo shoot and interview, together with co-stars Sara Paxton and Ashley Madekwe, to promote the show. “Mischa wants very much to be a part of the piece and be interviewed later, but she has to get well so that she can be healthy in order to start actual production next week,” Burke said. Production for the show was scheduled to begin next Wednesday, although a CBS spokesperson later e-mailed she does not know when Barton will be in New York.

A rep for Barton had called WWD on Wednesday to say she would not be able to make the trip. Almost immediately thereafter, rumors started swirling on the Internet. Supposedly, on Wednesday Barton placed a call to the Los Angeles Police Department, and was subsequently admitted to Cedars-Sinai Medical Center. In “The Beautiful Life,” she is set to play a Kate Moss-esque model who resurfaces after a mysterious absence.

This story first appeared in the July 17, 2009 issue of WWD. Subscribe Today.

Paxton and Madekwe did arrive as scheduled for the WWD shoot. Though neither had spoken to Barton, at least Paxton was following the rumors. “I read on People.com that she’s under 5150 (involuntary psychiatric hold) à la Britney,” said Paxton. “I don’t know what’s going on. I hope she’s OK.”

VIDEO VAMPS: Madonna evidently began filming a new music video, titled “Celebrate,” during her Sticky & Sweet concert in Milan, according to sources. And some of the scenes were reportedly shot during a postshow dinner hosted by the pop star’s pals Stefano Gabbana and Domenico Dolce at the design duo’s sleek club-restaurant Gold on Wednesday night. Filled with gardenias and lit with strobe lights, waiters served mojitos, “limoncello” and Champagne. Clad in a gray leopard dress, Madonna brought along beau Jesus Luz, while guests attending walked away with the ultimate trophy: a one-off “We Love Madonna” T-shirt embellished with Swarovski crystal hearts. Cameras will likely be filming more scenes today and Saturday at the designers’ Metropole Theater, the former cinema they now use for fashion shows and events. The new single, which won’t air before Aug. 3, is said to be a summer dance anthem-homage to the singer’s classic tracks.

IT’S A DEAL: As MAC heads downtown to do fashion shows at New York’s Milk Studios, Maybelline is moving in — to the Bryant Park tents. Maybelline will be the official cosmetic sponsor for IMG Fashion’s Mercedes-Benz Fashion Week, confirming a July 13 report in WWD.

The cosmetics company inked a two-year deal, which will see it through the transition to Damrosch Park at Lincoln Center in September 2010 and beyond.

This will be the first time Maybelline sponsors the New York shows, though it has supported similar events in Berlin, Amsterdam and Moscow. As part of its sponsorship role, Maybelline will support several designers at the tents this September, including Charlotte Ronson, Tracy Reese, Erin Wasson x Rvca and Michael Angel. Charlotte Willer, Maybelline’s global makeup artist, will lead the makeup teams at the shows.

As reported, MAC Cosmetics was the previous cosmetics industry backer of the fashion shows, but it is now said to be involved in developing a lead sponsorship role for runway shows and presentations at Milk Studios during fashion week.