First Lady Michelle Obama sure knows her designer labels, but her handlers must have misplaced her fashion calendar. 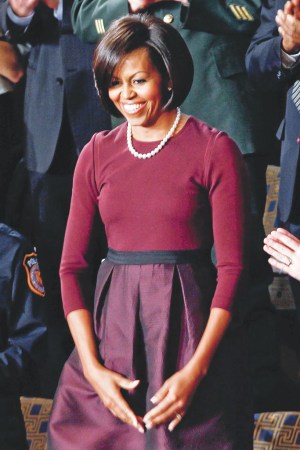 NOT THIS TIME: First Lady Michelle Obama sure knows her designer labels, but her handlers must have misplaced her fashion calendar. Instead of hosting the annual National Design Awards luncheon in July, as has been the case for the past 10 years, this year’s meet-and-greet will be held at the White House on Sept. 13. The timing — during New York Fashion Week — may prove to be tricky for fashion types. This year’s Fashion Design winner, Gilles Mendel, moved the date of his runway show to ensure that he can get to the festivities at 1600 Pennsylvania Avenue. Finalist Jason Wu, whose show is slated for Sept. 9, will be sitting out the Beltway excursion. Ditto for fellow runner-up Prabal Gurung, who will present his latest collection Sept. 10 at the IAC Building.

This time around there will be a cocktail party for this year’s winners and runners-up on Sept. 12, as well as The Teen Design Fair, a First Lady-initiated mixer for teens and honorees.

This story first appeared in the August 15, 2011 issue of WWD. Subscribe Today.

GIRL BONDING: For some people, time off during the summer means they can chill at the beach. For Rosario Dawson, it means she can go crazy with her nails. “I just finished a movie. I can do whatever I want,” the actress said, waving her square-tip fingernails painted a blush pink. At G-Star Raw’s party on Thursday at Kitson in Los Angeles, Dawson was eyeing a guest’s digits that were decorated with tribal warrior slashes in neon green, white and black. Stations for nails, hair and makeup were set up to entertain Dawson, Kristin Chenoweth and other guests at the Dutch denim brand’s first-ever women’s themed party, which also unveiled a design collaboration between G-Star and Kitson. Dawson may enjoy her nail art for just a short period. Having finished portraying a maid in the Fifties-era “Hotel Noir” with Carla Gugino, Malin Akerman and Danny DeVito, she’s signed on for “The Blind Bastard Club” with Mickey Rourke and director Danny Boyle’s “Trance” with James McAvoy and Vincent Cassel.

AFTER TWILIGHT: Bella Swan won’t wed Edward Cullen until Nov. 18 when “The Twilight Saga: Breaking Dawn – Part 1” bows in theaters, but Alfred Angelo has already secured the role of exclusive licensed manufacturer of Swan’s bridal gown. Carolina Herrera designed the one Kristen Stewart actually wears in the flick, but Alfred Angelo will work on the replica version. The wedding dress will be marketed under the Twilight Bridal by Alfred Angelo label through Alfred Angelo boutiques and independent stores.

A 24-year-old professional model, Miss China will represent her country at the upcoming Miss Universe pageant in São Paolo, Brazil, on Sept. 12.