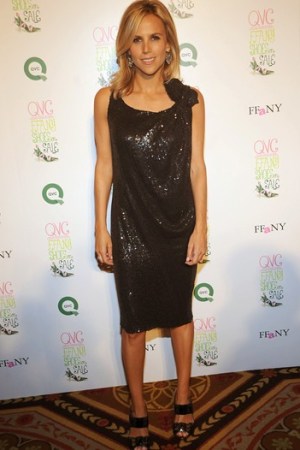 WELL SOLD: In the first 90 minutes alone, shoppers at FFANY Shoes on Sale’s annual benefit Wednesday night at the Waldorf bought more than 33,000 pairs of half-priced shoes, raising more than $1 million for breast cancer research and education. “I will admit to a little anxiety [about] how consumers would react tonight in the midst of this troubling environment,” said Michael George, president and chief executive officer of QVC Inc., host of the event, which raised more than $3 million overall.

The event honored Tory Burch as designer of the year and Saks Fifth Avenue as retailer of the year. Saks president and chief merchandising officer, Ron Frasch, accepted the award for the store, and presenters included Rose Marie Bravo, Katie Lee Joel, Pamela Fiori (who “was relieved this event was for FFANY not Fannie Mae”) and Reba McEntire, who is featured in the public service announcements for Shoes on Sale this year. Throughout the night, jokes comparing investing in the market to investing in shoes abounded. “Right now, I think it’s wiser to invest in shoes than in the bank, and when it comes to elevating your mood, high heels pay high dividends,” said Glenda Bailey, editor in chief of Harper’s Bazaar, which won the evening’s Journalism Excellence award.

This story first appeared in the October 17, 2008 issue of WWD. Subscribe Today.

NOTABLE ABSENCE: Just where in the world was Adam Lippes Wednesday night? The designer was scheduled to be at Saks Fifth Avenue to speak on the Business of Fashion panel hosted by Saks Fifth Avenue and MasterCard with the Council of Fashion Designers of America (see story, page 15). But it was rumored that night that Lippes pulled out in a snit after Saks dropped his line. Not so, said a Lippes spokesman. “We have pulled the brand from Saks because they were never able to follow through on their word,” the spokesman said. “Now is the right time to focus on our strongest wholesale partnerships.” Saks declined to comment Thursday.

ANDRE’S NEXT NEW YORK VENTURE: André, the Parisian graffiti artist-turned-nightclub entrepreneur, is planning to make a splash with a second New York after-dark joint. The artist, who unveiled two spherical black plastic sculptures in Paris’ Bristol hotel Wednesday night ahead of the city’s FIAC contemporary art fair next week, revealed he will open a nightclub on the top floor of André Balazs’ Standard Hotel in New York’s Meatpacking District. “It has the most amazing views over New York,” he enthused, adding he has plenty more gigs in the pipeline for Paris’ nighttime scene. “I’m turning the Café Moon, that was Paris’ first lesbian bar in the Thirties, into a club, and I’m taking over an amazing old brasserie on the Rue de la Fidélité. My idea is to turn it into [a mythical meeting point], like La Coupole used to be.” Meanwhile, Victoire de Castellane, Audrey Marnay and Jean-Charles de Castelbajac sized up the wacky garden sculptures, which were daubed with André’s signature cartoonish tags. A thousand limited edition smaller versions of pieces will be commercialized over the coming months.

Artist Samuel Boutruche, who’s known for his frame-within-frame wall installations, said he and his art partner, Benjamin Moreau, are due to stage a show at the Emmanuel Perrotin gallery in Miami in January. “We basically take pictures, rip the canvases out and work with the frames, which is pretty sad,” said Boutruche.

GILHART KNOWS: Barneys New York fashion director Julie Gilhart believes in Rodarte’s Laura and Kate Mulleavy. “They are two of the best designers right now.…I really do know. I don’t brag that often, but I really do know.” Gilhart was in her hometown of Dallas with the Mulleavy sisters on Wednesday to present a runway show of the designers’ spring collection at NorthPark Center during Fashion at the Park. Rodarte’s ethereal dresses are stocked in 42 stores this fall and will probably expand to another 10 for spring, the Mulleavys said.

“While it’s a very volatile time, our business is a special type of business and clientele,” Kate Mulleavy said. “There are ups and downs. It’s definitely hard for everyone, but every year we are growing.”

As for Barneys, the chain’s business “is all tied to the economy,” Gilhart said. The two-year-old flagship at NorthPark has been challenged in Dallas’ competitive retail landscape, including Neiman Marcus. “Things just take time,” Gilhart said. “We have a great store and beautiful merchandise. Dallas is a city of tradition and culture, and people are loyal.”

LACOSTE AND HADID’S NEW SHOES: Architect Zaha Hadid has yet another fashion collaboration: a line of footwear with French sportswear brand Lacoste. The company was in London Wednesday to exhibit prototypes of the shoes at the city’s Home House ahead of the opening today of the Frieze art fair. The ergonomically designed, sleek leather shoes have been fashioned so they cleave to the shape of the foot. “To us, it’s always the same, whether it’s architecture or design, we start with that Zaha movement,” said Woody Yao, associate director at Zaha Hadid Architects at the firm’s East London headquarters earlier that day. Yao explained that his team fed Hadid’s paintings into a computer program, and then manipulated those images into the shape of a foot. The Zaha Hadid collection for Lacoste will launch in two phases — a limited edition line, of which 1,000 pairs will be made, will launch at selected boutiques in March, while the main collection, of which 10,000 pairs will be made, will launch in May. Prices for the collections have not yet been confirmed.