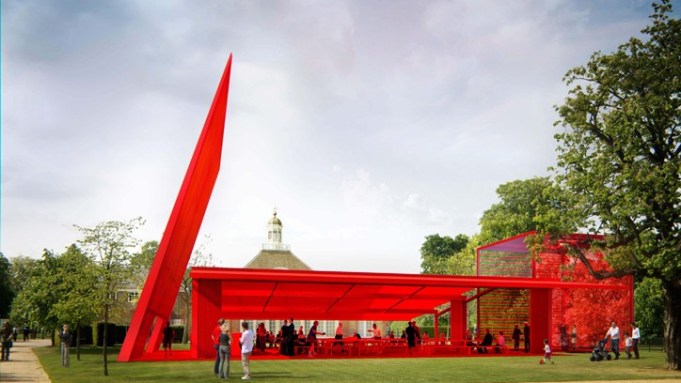 NOUVEL’S SERPENTINE: Pritzker Prize-winning Jean Nouvel is the latest architect to lend his talents to designing the annual summer pavilion at London’s Serpentine Gallery. Nouvel will design a pillar-box red pavilion in lightweight glass, polycarbonate and fabric. The renderings show a stark, geometric structure with one freestanding wall that juts 12 meters into the air. The pavilion, which architects have six months to complete, will be open July 5 to Oct. 21. During its run, it will house artist Christian Boltanski’s installation, “Heartbeat,” and host the gallery’s series of summer talks.

GAGA’S GLASSES?: Lady Gaga is no stranger to outrageous eyewear — she even sports sunglasses fashioned from rows of lit cigarettes in the controversial video for her single “Telephone.” And now, word is that the singer is planning to parlay her out-there ideas into her own line of sunglasses, and is said to be in talks with London label Linda Farrow about collaborating on designs. If a collection does go ahead, it would be the latest in a series of collaborations for the 40-year-old label: Linda Farrow launched sunglasses designed by singer Róisín Murphy last month, and has created sunglasses for designers including Alexander Wang, Matthew Williamson and Dries Van Noten. A spokeswoman for Linda Farrow could not be reached for comment Wednesday.

AIN’T IT RITCH(IE): Shooting the latest Dior Homme fragrance advertisement, featuring Jude Law, is none other than Guy Ritchie. The duo has been pounding the streets of Paris since Wednesday, and filming should be a wrap tonight. This is by no means their first encounter: Ritchie directed Law in the “Sherlock Holmes” movie out last year.

DEL VECCHIO HONOR: Just call them Mr. and Mrs. Philanthropy. Brooks Brothers chief executive officer Claudio Del Vecchio and his wife, Debra, will be honored Friday night by The Mentoring Partnership of Long Island for their leadership and contributions to the business and philanthropic communities of Long Island, where they live. Debra Del Vecchio has been on the organization’s Leadership Council for more than four years. The event will take place in Brooks Bros.’ Americana Manhasset store. This is the sixth year Brooks Bros. has hosted the event.

SPEAKING OUT: Isaac Mizrahi may feel proud of many accomplishments, but asked about his biggest one so far, the designer was surprisingly lost for words. “I hope it’s not ‘Unzipped,’” he said, referencing the 1995 documentary about him. Speaking to students at the Fashion Institute of Technology Monday, Mizrahi recalled his career trajectory, from his childhood dress puppets to working at Perry Ellis, Geoffrey Beene and Calvin Klein to enlisting supermodels such as Linda Evangelista, Christy Turlington and Naomi Campbell for his first show. Throughout, he kept the audience in stitches with anecdotes and barbs as only Mizrahi can. The designer is no stranger to business woes, but told his audience he firmly stands by his beliefs after all these years. “I think design is much more important to selling,” he said. Luckily, he has plenty of extracurricular projects. In May, Mizrahi will head to St. Louis to design and direct “A Little Night Music” at the Opera Theatre there, followed by filming for the second season of “The Fashion Show” on the Bravo network. “I will be the executive producer, so it will be better,” he promised.

WORKIN’ IT: Like any quick-thinking designer worth her salt, Vivienne Tam is using her appearance on tonight’s episode of “Project Runway” to do some serious self-promotion. As the challenge host and guest judge for what will be a technology-oriented show, she plugs the Butterfly Lovers Clutch that she designed through a collaboration with HP.

ESTELLE THE DESIGNER: Estelle threw a dinner Monday night at New York’s Hotel Griffou to celebrate her jewelry collaboration with Rachel Roy. The two have created a collection of costume pieces for spring under the Estelle for Rachel Rachel Roy label. And the way Roy tells it, the design credit does belong to the singer. “It was all Estelle,” said Roy, tucked in a corner with pal Veronica Webb.

Before dinner, half a dozen guests such as June Ambrose enthusiastically snapped pictures with their phones of Roy, Estelle, Roy and Estelle, Roy with Estelle and Webb, Webb modeling the jewelry and every variation thereof for their Twitters. Finally everyone settled down and dined on everything from seafood stew to Nutella cheesecake.

RICH WOMAN, POOR WOMAN: Andrea Buttner, the latest winner of the Max Mara Art Prize for Women, has poverty — not luxury — on the brain. The German artist, who was feted Tuesday night at London’s Whitechapel Gallery, which supports the prize, and later over dinner at the home of Italian collector Valeria Napoleone, will explore the idea of poverty, mendicants, the legacy of St. Francis of Assisi and the Italian Arte Povera movement during a six-month residency in Rome and Biella that’s bankrolled by the luxury brand. Buttner, who works in a variety of media and explores the overlap between art and religion, previously studied a community of Carmelite nuns specialized in craft work — and gave them a camera to film themselves. “It’ll be interesting to see what she does in Italy,” said Iwona Blazwick, director of the Whitechapel Gallery. “Andrea explores the idea of art not as an investment vehicle, not as a trophy, but as a gift. We liked the way her proposal dealt with ethics and the economy of means — especially in times like these.”