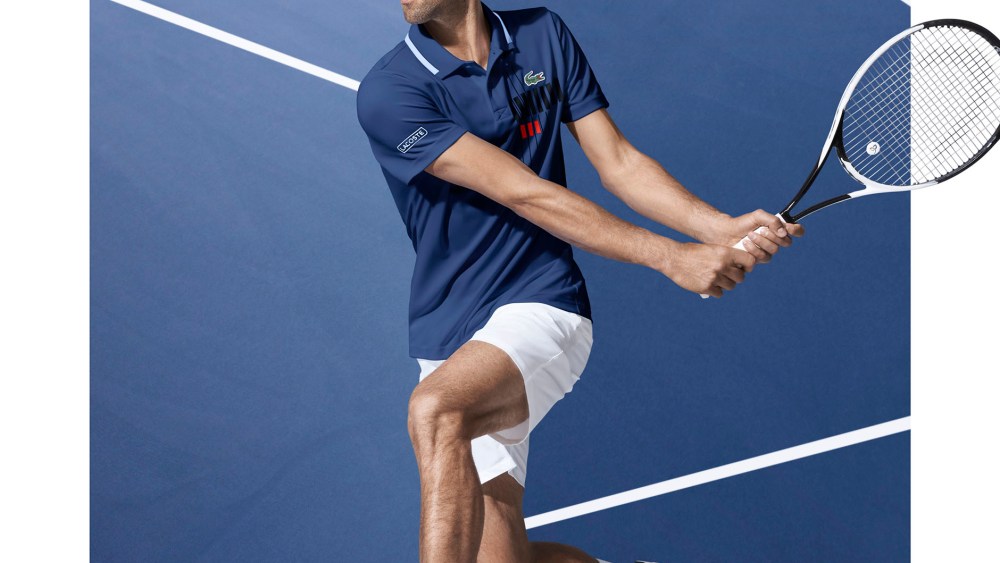 The Serbian player, who celebrates his 30th birthday today, is ranked number two in men’s singles tennis and has racked up 12 Grand Slam titles. He hired Andre Agassi to be his new coach following his loss to Alexander Zverev at the Italian Open final on Sunday.

Agassi will join Djokovic in Paris for the French Open, which kicks off on May 28. His previous coach was Boris Becker, who departed last December, after three years working with Djokovic.

The tennis player will act as a brand ambassador for Lacoste as part of a five-year contract and will appear in advertising campaigns for the French clothing label, which was founded by René Lacoste and André Gillier. Born in Yugoslavia, Djokovic has been playing tennis since he was four and is a resident of Monaco.

The announcement follows the expiration of his five-year deal with Japanese fast-fashion retailer Uniqlo, which appointed him its global brand ambassador in 2012. Previously, Adidas and Sergio Tacchini provided his on-court attire. Djokovic has also been an ambassador for Seiko watches since 2014. According to Lacoste, Djokovic embodies the values of its founder as they both share traits such as “fair play, tenacity and elegance.”

“I was very fortunate in my career to be associated with many of the big brands,” said Djokovic. “I just ended my five-year relationship with Uniqlo that wasn’t a sports brand. It was an interesting and also successful relationship. As a tennis player, you relate to the brand that comes from your own field.”

Thierry Guibert, chief executive officer of Lacoste, welcomed the label’s new ambassador at a presentation held at the Monte-Carlo Country Club in Monaco. Overlooking the Mediterranean Sea, the tennis club offered a grand view of the Monaco coastline and serves as the home of the ATP’s Monte Carlo Masters tournament. The brand noted that initiatives with Djokovic include an eponymous clothing range to be donned on court as well as Grand Slam tournaments and other competitions.

Guibert said he was impressed by Djokovic’s simplicity and his behavior. “He’s one of the greatest in his sport,” said Guibert.

The ceo – who joined the company three years ago – presented the athlete with a crystal Baccarat statue of a crocodile.

Djokovic said values are important to him. “We face a lot of adversities and challenges — and a lot of egos,” said Djokovic. “Today’s world represents a lot of challenges but it’s a beautiful world. I think at the end of the day we are all human and we all make mistakes and we learn from them. We try to grow from them, to evolve and be better.”

Djokovic noted some similarities between him and the founder and said he had a similar wall to practice his sport. “It was an important part of my tennis beginnings in Serbia,” said Djokovic. “Also, I love golf and he also played a lot of golf.

“Rene Lacoste was a very unique personality,” he added. He’s a great champion but also someone that has brought revolution to tennis and fashion as well. He has a lot of character and charisma. He never wanted to become a tennis player and that’s something I can relate to. I don’t consider myself just a tennis player.”

The Novak Djokovic performance collection is comprised of pique polo shirts — done in hues of blue, white, red and a graphic print — and shorts, which come in white and black. There is also a khaki blazer, trousers and a zip jacket. It will be available for purchase at Lacoste boutiques this month. The range was designed for comfort with ergonomic stitching and features Djokovic’s signature etched on the left sleeve of the polo shirt.

He said that the Lacoste team was “open minded” when they discussed the range. “Along the way we are working and communicating this synergy and relationship to make sure that I have the best, possible design, “said Djokovic.

The athlete will debut his new range in Paris during the French Open. “I think in Paris [wearing the collection] it will feel different,” said Djokovic. “It’s a French brand and Roland Garros is one of the biggest tournaments in the world. So I’m kind of playing in their home court and it will feel very special.”

Djokovic pointed to the Lacoste polo shirt said it has always been a “signature product.”

“My father and mother have been wearing Lacoste their entire lives,” said Djokovic. “I remember opening my father’s closet and saw different colors of Lacoste. I was wearing that when I was younger as well.”

While out on court, the athlete noted the importance of being “camouflaged” while he is playing. “I like to pick the color closest to the court. It makes me feel compact, aligned and connected to the court and the tournament surface. But at the same time it also helps me in the game because tennis is obviously a very dynamic and quick sport. Anything can happen in a split second.

“I always like to wear different colors,” said Djokovic. “I’m not really fond of only wearing one color – even though I know it’s been Lacoste’s preference. We’ll see, maybe we can compromise. I care about what I wear on the court. It’s not only the way you feel but the way you look. You carry that on the court. You can sense a different energy and aura around the player when they are aligned with the values of that brand.”

Alongside the clothing lineup, Djokovic will appear in the brand’s advertising campaign. The brand has created created a short film, which launches on May 28. Directed by Julien Pejul, the clip focuses on the brand’s L.12.12 Polo shirt. Print imagery was shot by Jacob Sutton in black and white and in color to pay homage to the brand’s heritage.

“Values are very important to me,” said Guibert. “When you are buying Lacoste, you are buying values. Tenacity, fair play, commitment, humility. When you sell products to consumers then you have to put values in your story. People are looking for values.This is a key point for us for today and for the future.”

Among the other initiatives for the label, include plans to help kids at the foundation and said that the brand recently launched a new academy. While he could not disclose sales projections, Guibert said that he is “very satisfied.”

“When I joined the company I changed how we do business a bit,” he said. “To do less, but better. We put the store network under control and planned to only sell our products in quality stores. We wanted to refocus on quality and value for money.

“With this strategy more often you can see yourself decreasing but it was not the case for us,” he added. “So it was great and since the beginning of 2016 we were up high single digits.” He pointed to Europe and Asia as dynamic territories and said that the U.S. was “a bit difficult.”

“The market is a bit different,” Guibert. “It’s a very promotional market. It’s growing but not at the same pace as Europe and Asia.”

See Also From WWD:
How Lacoste Reestablished Itself as a Premium Brand in the U.S.