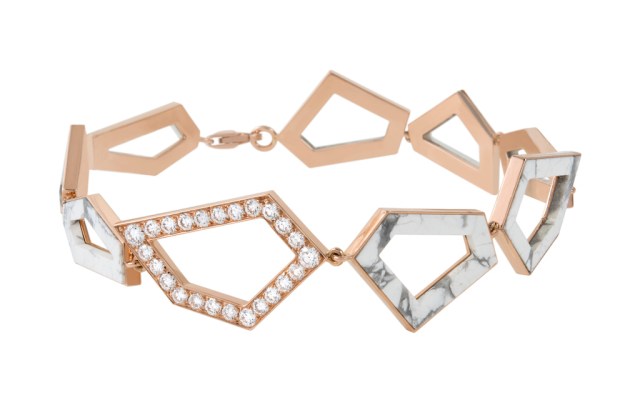 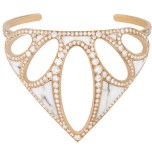 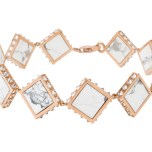 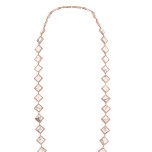 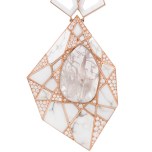 The Tuwaiq line combines pink gold and diamonds with howlite, a marblelike veined stone, in geometric compositions with a resolutely modern aesthetic. Standouts included a long pendant necklace in a crazy paving motif built around a nine-carat diamond slice with inclusions, and set with a further 159 diamonds.

“I love included stones. I think they make for far more interesting pieces of jewelry, and so I took the inspiration from the actual inclusions to try and spread them out,” explained AlFaisal, who often draws on nature for her designs.

“Howlite is not very popular, so it’s not used that much in jewelry. Unfortunately, I think most of the time people dye it to make cheap, imitation turquoise, while this is it in its natural form, which I think is gorgeous,” she added.

Founded in 2014, Nuun is set to open its first store worldwide opposite the Bristol hotel on Rue Saint-Honoré in Paris in April. The brand until now has been carried only at the Four Seasons Georges V hotel in the French capital.

A member of the Saudi royal family, AlFaisal currently has all her pieces produced by a specialized workshop in Paris, but she is mulling setting up a studio in Riyadh. Just don’t call her a Middle Eastern designer.

“I’m a Saudi designer, so obviously everything that I do is going to be touched by my worldview or my point of view. But I’m not very keen on my jewelry being labeled as either specifically Middle Eastern or even French. I really would like it to just be, you know, jewelry,” she said.