The President ditched his Tag Heuer for the company’s sporty black chronograph watch, made by Jorg Gray. 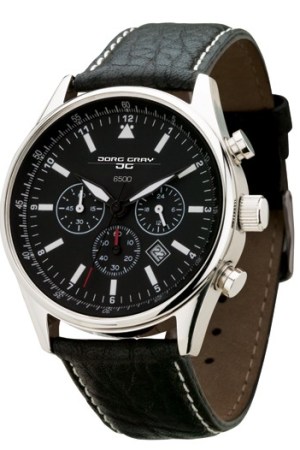 OBAMA TIME: An obscure private label watch brand is getting a big lift from a high-powered fan: President Barack Obama. The Jorg Gray line of watches, previously distributed in the corporate gifts market, is taking aim at the retail sector after the President ditched his Tag Heuer for the company’s sporty black chronograph — a watch he has sported to most major events of his political ascendancy, including the inaugural balls. The fledgling brand launched an e-tail site two months ago, Barackswatch.com, and is taking its wares to Baselworld next week to shop for brick-and-mortar partners. It’s been a considerable shift for parent company Logomark, whose core competency is making customized shirts, totes and key chains for corporate clients. “This doesn’t happen to someone everyday,” said Trevor Gnesin, president of Logomark of his fateful alignment with the President. He owes it all to a member of Obama’s security detail, who gave the then-Senator the watch for his birthday in August 2007.

KATE IN PARIS: Kate Moss, who was in Paris during fashion week, stayed on for a modeling assignment. Early last week, the supermodel did a shoot in Place de la Concorde for a future women’s fragrance for Yves Saint Laurent, wearing looks from Stefano Pilati’s pre-fall collection for YSL.

REVELERS IN RUSSIA: Against a backdrop of contemporary art (think animatronic boy pedalling a tricycle and drummers squirming on the floor) partygoers including Larry Gagosian, Shala Monroque, Olympia Scarry, Molly Dent-Brocklehurst and a mob of Russian oligarchs and celebrities mingled Thursday at Dasha Zhukova’s gallery — the Garage Center for Contemporary Culture — in Moscow. The occasion was a new exhibition of works from François Pinault’s collection, called “A Certain State of the World,” which runs through June 14. “You’re like my bride,” Scarry beamed at Zhukova, her close friend clad in a white Ermanno Scervino dress. “I am your bride. You’re my Elvis,” Zhukova shot back. Scarry wore a retro cream-colored pantsuit by Yves Saint Laurent. Over their shoulders, Roman Abramovich, Zhukova’s billionaire boyfriend, made the rounds. “I really liked the Flavin hallway; I could stay in there for hours,” Zhukova added, referring to a room lined with the minimalist’s soothing fluorescent lighting. Other highlights were Takashi Murakami’s models of alien cyborgs and Jeff Koons’ seamless giant heart. Zhukova, who also runs fashion label Kova&T, said she wasn’t ready to reveal her plans for London’s Pop Magazine, where she recently became editor. Later, a select group dined at the Central House of Writers, a graceful, columned institution redolent of the Soviet Unions’ early years. Next up at the Garage are works by the unlikely duo David Lynch and Christian Louboutin, starting April 8.

SHOWGIRLS: The biggest runway show of Los Angeles Fashion Week so far didn’t feature new designs, but vintage frocks supplied by Decades. The charity show was hosted by Rachel Griffiths to benefit the Museum for Contemporary Art here. Nearly 500 people, including Kelly Lynch, Rose McGowan, Zoe Saldana, Nicole Richie and Perrey Reeves, gathered in MOCA’s main hall, while Louis Verdad, who’s back designing a new collection called Louver by Louis Verdad, showed his new 21-piece, all-black, Goth-inspired collection on mannequins in a gallery upstairs. “I wanted to keep it edgy without making it trashy,” he said of the Paco Rabanne and John Galliano-inspired collection. “Dita Von Teese is my muse.”