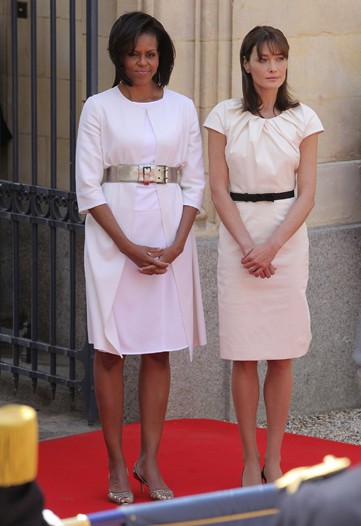 WHEN IN PARIS: Few kids get to lunch out at the Elysée Palace. That was one of the treats in store for Sasha Obama and her older sister, Malia, who accompanied their parents to the City of Light over the weekend. The President and First Lady were in France to attend an event honoring the 65th anniversary of D-Day in Normandy on Saturday — where she wore a Narciso Rodriguez dress under a Michael Kors coat, while French First Lady Carla Bruni-Sarkozy opted for an equally pale dress by Christian Dior. But the Obamas’ whistle stop visit to Paris also was filled with plenty of sightseeing — and a spot of shopping. Having flown in prior to President Obama’s arrival, Michelle Obama treated their daughters to a trip to the top of the Eiffel Tower Friday night (the hip mom was dressed in a “mouthwash” green Rick Owens jacket, accessorized with a scarf by Prova and those Lanvin sneakers). Amidst visits to other cultural Paris sites, such as the Pompidou Center and the Louvre museum, the Obama sisters, who are on school holiday, also got a tour of Bonpoint’s sprawling flagship on Paris’ Rue de Tournon, a brand spokeswoman confirmed. And, while the President jetted back to America, the First Lady and daughters scooted quietly over to London on Monday, where Michelle Obama had a private meeting with Sarah Brown, wife of the British prime minister, after which the three Americans had a whirlwind tour of the British capital. And now it’s Tuesday, so, according to the classic movie, Belgium must be next?

YES, WE KANE: Topshop’s third designer collaboration will be with London designer Christopher Kane. Consisting of 39 pieces, it will include clothing alongside accessories and shoes, and will launch in September during London Fashion Week.

HAVING A BALL: “Talk about grace on a court,” gushed Andre Agassi of French Open men’s winner Roger Federer. The retired tennis hero was in town with wife Stefanie Graf as guests of honor for the tournament. As Ambassadors of Elegance for Swatch Group’s Longines brand, the official partner of the tennis event, the couple also used the opportunity to talk up their respective charities: the Andre Agassi Foundation and the Children for Tomorrow Foundation. When asked who the model of elegance is in tennis today, Graf replied: “The sport in itself has a lot of style and elegance. If you look at history and see the early days of tennis, you can put those words together.” Agassi, however, was eager to put his earlier tennis looks (of the big bleached hair, bandanas and neon spandex shorts variety) behind him. “Aww, I’ve forgotten those years,” he demurred. So who has the best style on court today? “My wife,” he said.

HOST THE MOST: Azzedine Alaïa is to host a preview exhibition of some 40 vintage pieces by Elsa Schiaparelli slated to go under the hammer July 3 at Drouot-Richelieu in Paris as part of a vintage couture sale. Alaïa’s exhibit will run June 26 to 28 at his Paris headquarters.

AMERICAN BEAUTY: Following actress Elizabeth Banks’ recent appointment as a L’Oréal Paris spokeswoman, Max Mara is to present her with its Face of the Future award on Friday, as part of the Crystal + Lucy Awards. The event will be held at the Hyatt Regency Century Plaza Hotel in Los Angeles. In the run-up, Scarlett Johansson, Ryan Reynolds and Abbie Cornish are among stars expected to join Banks for a Max Mara gala dinner on Wednesday at the Chateau Marmont.

CENTS OF SMELL: Rapper 50 Cent — aka Curtis Jackson — is teaming up with Lighthouse Beauty to create a fragrance. Due this fall, the men’s scent, dubbed Power by 50 Cent, reportedly will launch first at Macy’s. The rapper is an equity partner in the venture. Power by 50 Cent is the first launch for the newly formed Lighthouse Beauty, which is comprised of artist managers at Brand Asset Management, the celebrities they represent, and developers and distributors of luxury fragrances. “The typical musician or actor might not know much about developing a fragrance or a skin care line, but he definitely wants to capitalize on his brand potential,” said Chris Lighty, chief executive officer of Brand Asset Group and founder of Violator Management. “After spending years bringing clients to major corporations to forge partnerships, I wanted to take that synergy to the next level by establishing a destination for artists and celebrities to create and distribute their brands from start to finish. What we’ll do at Lighthouse Beauty is not only transform a name into a product, but also take that product from its inception to the shelves.” Collaborations for the company will not be limited to those celebrities represented by Brand Asset Management, he said. Lighthouse Beauty is helmed by Lighty, Howard Sherman of Mod Beauty, Philip Zellner of Product King Marketing, World Source Marketing Group, 111 Design and Edge Display, and Glenn Nussdorf, a major shareholder of Parlux, Perfumania and Quality King.

BRINGING SEXY BACK?: Marc Jacobs isn’t only influencing fashion trends these days, but also trade show locales. Project New York in July is moving to the Lexington Avenue Armory, the longtime home of Jacobs’ seasonal runway extravaganzas. “The Lexington Avenue Armory is the right environment and the right vibe with lots of cool historical significance,” said Sam Ben-Avraham, president of Project, which is a unit of Advanstar Fashion Group. “It has a lot of fashion history.” Project New York, which runs from July 20 to 22, is moving from its traditional home in the cavernous Jacob Javits Center. Ben-Avraham said the upcoming show would be “more juried” and “more streamlined” than previous seasons, but did not yet have figures on the number of brands showing. He said the economy was not a factor in moving to a smaller venue. “We wanted to change things up, turn up the volume and get people buzzing,” he explained. “And the Lexington Avenue Armory is definitely a lot sexier than the Javits Center.”