It's been 15 years since President-elect Barack Obama has bought a new tux, and his inauguration is the perfect time to break that string. 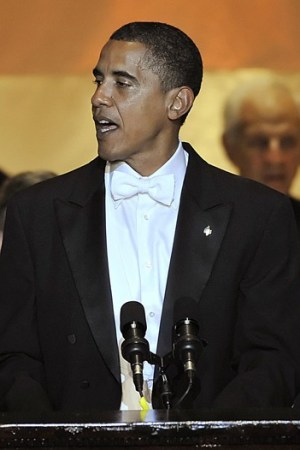 OBAMA’S NEW LOOK: It’s been 15 years since President-elect Barack Obama has bought a new tux — and his inauguration is the perfect time to break that string. Obama, who during the campaign touted U.S. competitiveness and decried the plight of the American worker, plans to wear a union-made tuxedo by Hart Schaffner Marx to the inaugural balls on Jan. 20, said Bruce Raynor, general president of UNITE HERE, the main apparel union, which endorsed Obama early in the primary season. Raynor told WWD that he was recently on a phone call with the President-elect and six other union presidents when the talk turned to what Obama would wear on the big day, which is expected to draw from 1 million to 4 million people to Washington. “As soon as he got on the phone, he told me he was working on his new tuxedo from Hart Schaffner Marx,” Raynor said. “He said after 15 years, it is time for a new one.” The Chicago-based men’s wear firm, founded in 1883, was one of the first clothing companies to enter into a collective bargaining agreement with a union in 1911. Homi Patel, president, chairman and chief executive officer of parent Hartmarx Corp. said he is working with the President-elect’s staff to determine whether Obama will wear a suit with a topcoat to the inauguration ceremony. This story first appeared in the December 5, 2008 issue of WWD. Subscribe Today.

THAT OTHER PRESIDENT: Speaking of the White House, current President George W. Bush and Laura Bush have decided where to live when they leave Washington on Jan. 20. The First Lady confirmed on Thursday that the couple bought in the wealthy Preston Hollow neighborhood in Dallas, where they lived before her husband took office as governor of Texas in 1995. The focus is on two adjacent homes on 2.4 acres with a total value of $3.7 million on Daria Place, a quiet cul-de-sac. Real estate and government records indicate that one of the properties just went under contract to an unidentified buyer and the other is held in trust by Bush’s close friend and accountant, Robert A. McCleskey of Midland, Tex. Just beyond the backyard creek boundary are the 14-acre-plus estates of two loyal Republicans — Tom and Cinda Hicks, who bought the Texas Rangers from Bush and his partners, and Gene and Roxanne Phillips, who own a fortune in real estate plus various investments in eastern Europe.

ON TOP AGAIN?: Sir Philip Green and co. stormed Milk Studios Thursday to show off Topshop and Topman’s spring-summer lineup — the first that will be carried in the It-Brit retailer’s 40,000-square-foot New York flagship, now set to open in March. Other than the main spread, which featured Eighties-inspired clubwear, webby knits, folksy printed dresses and more embellished denim than a bobby could shake a stick at, Green brought key pieces from Kate Moss’ line, as well as capsule collections by Marios Schwab, Richard Nicoll, Preen and Jonathan Saunders, all of which are ongoing. “I think actually the delay’s helped us,” said Green, putting his spin on the postponed unveiling of his first Stateside emporium. “We’ve got an army opening one store, so hopefully this demonstrates that we want to get it right and we’re committed to doing it properly.”

KOI’S CREATIVE OUTLET: Koi Suwannagate is the latest designer to take her wares to the Web, but she’s adding an old-world element. Shoppers can custom-select color and certain design details (like beading and embellishments) for one-of-a-kind designs. “Stores want to buy something that’s safe for them,” Suwannagate explained. “As the business grows, I find myself having to make those more commercial pieces. I miss the old days, when I created all the pieces myself.” She sees the e-commerce as a “creative outlet,” and hopes to open a brick-and-mortar retail outpost at some point in the future.

GOING FOR A SPIN: Auto enthusiasts will have the rare opportunity to test-ride the much-hyped Tesla all-electric roadster this Saturday, during a cobranded event with denim brand Agave at Malouf’s, the upscale specialty retailer in Burlingame, Calif. Agave founder and designer Jeff Shafer will be on hand to promote his men’s and women’s jeans, but a purchase won’t be required to take a spin (in the passenger seat) in the cutting-edge $109,000 auto, which is the first highway-ready, zero-emission vehicle for sale in the U.S. The Tesla’s battery charge will be good for about 30 rides, on a first-come, first-serve basis. Agave has a long-standing relationship with Tesla, outfitting the staff in the start-up’s showrooms in Los Angeles and Menlo Park in California-casual combos of jeans and knit tops. “We both have a luxury customer that wants the coolest, newest and best designs and be eco-conscious at once,” said Shafer of the partnership.