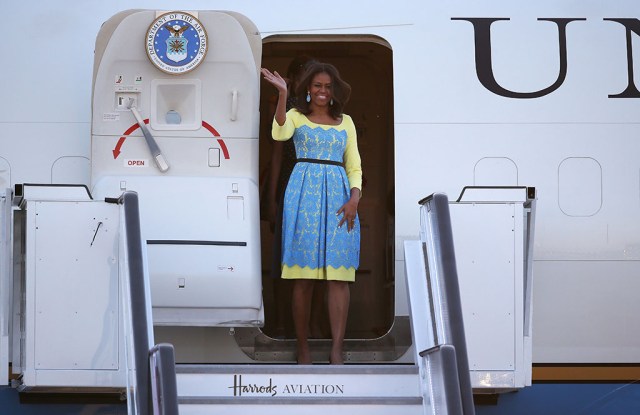 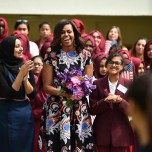 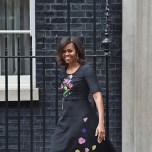 GIRL POWER: Michelle Obama, along with daughters Sasha, Malia and mother Marian Robinson arrived in London on Monday for a week-long tour of Britain and Italy to support Michelle Obama’s Let Girls Learn initiative. Dressed in a yellow and blue lace Preen by Thorton Bregazzi dress, Obama landed at Stanstead Airport and was welcomed by military families.

During the two-day stay, the American First lady will promote her campaigns for girls’ education.

The Obamas saw Prince Harry at Kensington Palace, met with students at the Mulberry School for Girls in east London to discuss her campaign, and had tea at Downing Street with Prime Minister David Cameron and his wife, Samantha.

While at the Mulberry School for Girls, Mrs. Obama spoke at a round table discussion to announce a new partnership between the United States and the United Kingdom to improve education for adolescent girls, as  part of her Let Girls Learn initiative, which the Obamas became involved in earlier this year.

“There are 62 million young women like all of the girls here…who aren’t getting an education, and their potential is just being lost. And we can’t afford that,” Obama said, referring to the figure for how many girls globally are not in school. She said that the U.S. is partnering with the U.K. as the U.K. “has been a leader in educating adolescent girls for quite some time, and my hope is that the U.S. will soon continue to invest and catch up.”

The Let Girls Learn initiative is part of the United States Agency for International Development. So far, the initiative has invested $1 billion annually in education programs, supported education programs in 18 African countries and helped to train over 300,000 teachers world wide, according to its Web site. “We’re going to try to use our leverage to pull in more partners, to get more resources, to get the U.S. to commit even more to this initiative,” said Obama Tuesday.

After their U.K. visit, the Obamas will head to Italy to meet U.S. armed services families based in Europe and to visit the Milan Expo.