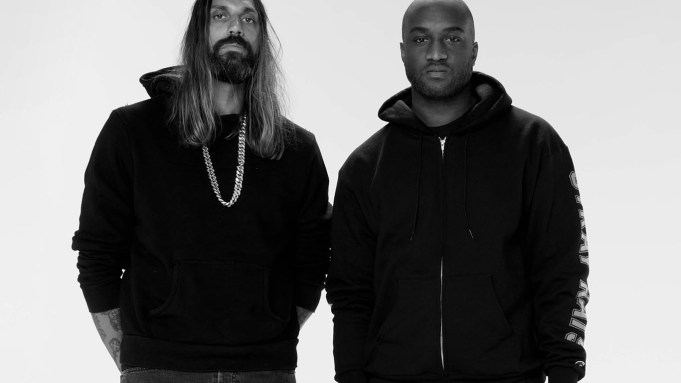 Off-White’s Virgil Abloh and Byredo’s Ben Gorham are unveiling in Paris their Elevator Music concept — a product that meets sensory experience replete with a multicategory capsule collection, music and art.

A party today will fete the opening of an installation where visitors can immerse themselves in Elevator Music, which according to Gorham, was conceptualized a year-and-a-half-ago as “this space we were going to create to fill with ideas and product.” The installation is open to the public March 4 and 5.

“We shared this spirit of creating our own framework and had very clear ideas of how we could…grow something in a different way and speak to an audience in a completely different way,” explained Gorham, noting that fragrance was the first product the two got to co-creating to set the tone for what ultimately became a confluence of commercial and experiential components.

The two enthusiastically delved deeper into the genesis of the collaboration — it’s a “nondescript description of a space for us to be creative,” Abloh continued — which at first sounds as esoteric as one would expect from the creative director of a brand like Off-White.

But upon further explanation it becomes clear that the concept he created with Gorham, while still abstract, is thoughtfully and intentionally executed. Fragrance is just a part of the multifaceted project, which consists of both tangible (product) and experiential elements (music and art). With Elevator Music serving as the overarching theme, a traveling installation today kicks off in Paris before making stops at Selfridges in London, New York, Los Angeles and South Korea.

“We were both inspired by this literal idea of elevator music. You get into an elevator space and it plays background music to set a tone. It’s not at the forefront….What we tried to do is capture a scent that was sort of elevator music for your life, for you,” Abloh articulated. “Elevator music is, in my mind, a metaphor for the space for Ben and I to describe our freedom. Both of our projects, by the nature of how we started them, gives us freedom to do and define a space.”

Gorham said that, in formulating, the two tried to understand what young people “want to smell like and what they do smell like.” The goal was to create something that allowed for personal expression that was “less dictating” than traditional scent.

“It was extremely simple, we focused on a few raw materials. We worked on this theme of ‘less is more,'” Gorham said. “It was this vibe of creating something unique…so it doesn’t smell like anything you’ve smelled before, and at the same time you have a hard time describing or placing it…It really needs a wearer, it really needs a person, it has no real value by itself.”

But technically, if one were to use actual fragrance terminology to define Elevator Music, the description would be a woody floral.

In concert with the eau de parfum, Gorham and Abloh convey their message through music and an art installation, as well as denim, t-shirts and bags.

For Gorham, choosing a gallery setting and having a “blank canvas approach” was essential for their vision to come to life. The two commissioned work by Carsten Höller, the artist responsible for the 2004 installation “The Elevator” that Gorham was, and still remains, fascinated by.

The artist’s original work drew inspiration from Swedish scientist Gunnar Johansson’s research in relation to human movement perception and “elevator syndrome” in the Seventies. For Elevator Music, Höller created a new version of “The Elevator” at a larger scale. It’s the center of the show in Paris.

“This is not a marketing exercise where we need to plaster up some photos that look like fashion and sell this idea of a scent,” said Abloh. “It’s us reaching out to our network of artists to give color to the scent.”