The painting depicts the head and shoulders of Catherine and, as per her suggestion, shows her natural persona, and not her official one. 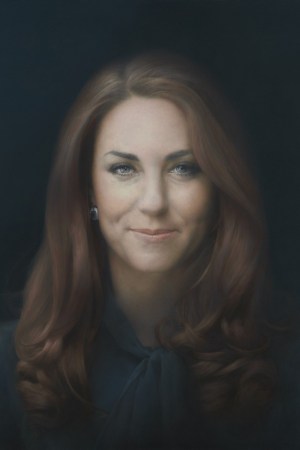 PORTRAIT OF A DUCHESS: The official portrait of the Duchess of Cambridge by Paul Emsley was unveiled on Friday. The subject of the painting was joined by her husband, the Duke of Cambridge, at the National Portrait Gallery to view the piece, which she described as “amazing.”

Wearing an oxblood dress by Whistles, she spent about 10 minutes looking at the painting privately before meeting the artist, his wife, Susanne, and daughter, Marie.

The painting depicts the head and shoulders of Catherine and, as per her suggestion, shows her natural persona, and not her official one.

Kate, who has been suffering from a rare form of morning sickness, told Emsly, “It’s just amazing, I thought it was brilliant.” William echoed her praise, saying, “It’s beautiful, it’s absolutely beautiful.”

The royal couple then attended a breakfast to celebrate the new addition to the gallery, at which they were joined by the Duchess’ parents. The painting will go on view to the public from Friday afternoon.