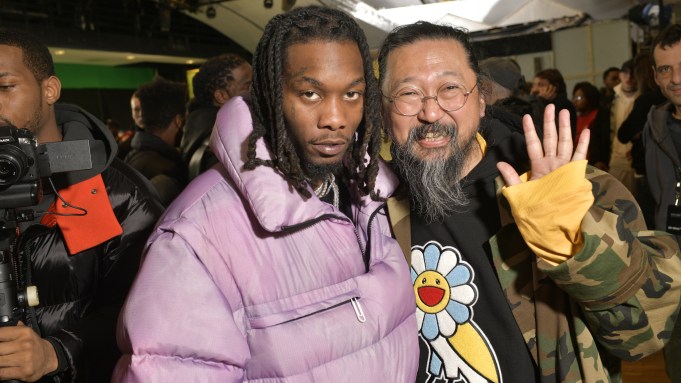 VIRGIL’S BEAT: The Off-White men’s fall 2019 show was crawling with musical artists. Not only relegated to the front row this season, they spilled out onto the catwalk with Offset and Playboi Carti setting a new runway tempo: slow and steady wins the race.

But Virgil Abloh is better known for a fast clip, which was the subject of Aleali May’s musings ahead of the show.

“Between this and Louis Vuitton, I mean, I don’t know how he does it…schedule-wise, so I definitely commend him — he’s always been hard-working,” she said. May, who has more women’s Nike Air Jordan models up her sleeves, noted Abloh has come a long way since she worked with him at RSVP Gallery.

Madison Beer was one of the singing artists keeping the front row bench warm. Taking a break from the recording studio where she currently spends her days — every day — Beer said she thinks she’s hit a new note for her new album.

“It’s coming along amazingly — such a special sound, so brand new for me…it feels so good to come into my own sound and not have to be compared to other artists, and I can’t wait for people to be like, ‘Oh, this sounds like a Madison Beer sound.’”

She took a stab at explaining it.

“It’s definitely crazy,” she added, with an emphatic clap of her hands.