With two weeks to go before 2011 folds, many are tying up loose ends at work so they can take a breather with friends. Guests managed to do a little of both. 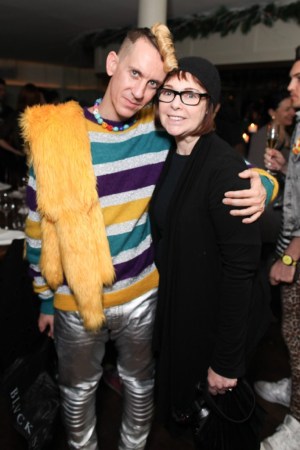 OH SO VERY: With two weeks to go before 2011 folds, many are cramming tying up loose ends at work so they can take a breather with friends. Guests celebrating Very.com’s U.S. launch Tuesday night at Soho House managed to do a little of both.

This story first appeared in the December 15, 2011 issue of WWD. Subscribe Today.

Astrologer Susan Miller also had some of her wares at the ready. For the 16th anniversary of Astrologyzone.com — “my site is older than Google” — Miller showed off her new 2012 calendar, which has 12 paintings by Gloria Vanderbilt. “Anderson Cooper bought 250 — I love him,” Miller said.

On the hunt for a Los Angeles store, Scott aims to open a pop-up store in New York in February. Hilton is also on the march, looking for a New York apartment, expanding the distribution of her jewelry collection and developing an apparel label with a designer she declined to name. Sister Paris is snowed under with her “17 different brands,” and their mother, Kathy, has gotten into the fashion game with a signature ready-to-wear collection that is being sold at “Neiman Marcus, Nordstrom and all her favorite stores,” Nicky Hilton said.

Barker, who shot Port for the Very.com ad campaign, said there will be a New York screening of his documentary, “Dreams Are Not Forgotten,” about the earthquake that rocked Haiti on Jan. 12, the first anniversary of the catastrophe. The “America’s Next Top Model” judge recently shot Mara Hoffman, another guest, for “Raw,” a new book of portraits. The noted fashion photographer is also pitching a reality show of his own about photography, philanthropy and fashion.