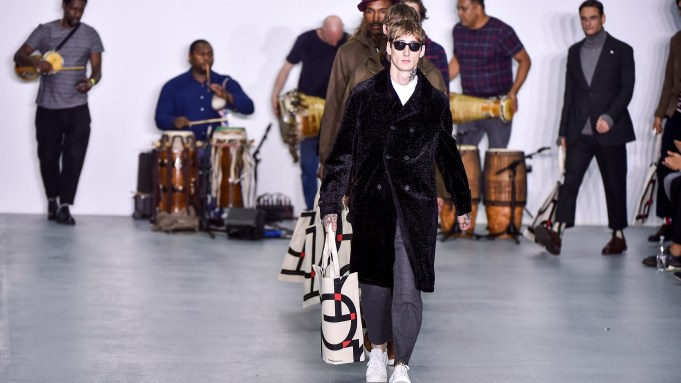 London men’s wear ambassadors David Gandy and Oliver Cheshire and model and TV personality Daisy Lowe attended along with 200 customers invited by Spencer to shop the collection, which will land in stores between now and November.

A selection of the items became instantly available to purchase via the Vero app as they were making their way down the catwalk. Large screens on the sides of the runway projected Spencer’s Vero profile, with new looks appearing every time a model walked down the runway.

The brand also enlisted YouTube personality and British GQ contributor Jim Chapman to introduce the show’s concept. Viewers could also watch the show live from both the British GQ and the British Fashion Council websites.

The collection, a mix of pieces from fall/winter 2016 and some of the brand’s classics, had a laid-back vibe with an eclectic mix of textures, earthy tones and relaxed shapes.

The looks referenced the drummer Ginger Baker and his collaboration with African musician Fela Kuti. There were velvet cropped trousers worn with suede patchwork bombers, and lots of loose tailoring and playful, striped knitwear.

Prices ranged from 65 pounds, or $85, for a T-shirt to 789 pounds, or $1,026, for an astrakhan coat. The purchasing process was designed for a seamless experience.

Vero representatives were scattered around the venue, available to assist customers. The ordering procedure was quick, with users asked to type in information including name, address and credit card details.

The app also incorporates an interactive element allowing users to like items and post comments. It doesn’t offer any sharing features, however, in order to ensure an advertising-free environment.

Temperley London embarked on a similar partnership with Vero, offering a tighter edit of three pieces from her spring/summer 2017 runway collection that were available to purchase from the app exclusively.

Vero is a social platform that allows users to sort and prioritize contacts, create privacy settings and curate the quality of information — including film, music, video — they release, and to whom. In some cases, they are able to sell products directly to followers.

The site’s co-founder Ayman Hariri said he has no plans for Vero to become a shopping app, but told WWD that he’s interested in any professional merchant who can provide a curated experience for the site’s users.

“Social is the center of our universe,” he said. “We want to give people just the right amount of tools to express themselves and allow for an interesting engagement between users and the brands and the people who they’re following.”