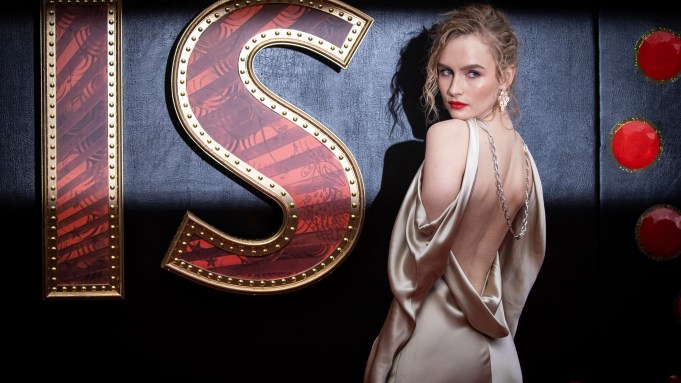 With premieres and press events for the upcoming “Elvis” film taking place around the world, actress Olivia DeJonge has made the case that she’s a red carpet style star to watch.

The 24-year-old Australian actress, who plays Priscilla Presley in the Baz Luhrmann-directed film, has stunned on every red carpet she’s walked for the movie, spanning events at the Cannes Film Festival to Sunday night’s premiere in Sydney.

DeJonge has been working with fashion stylist Chloe Hartstein for the “Elvis” press tour. DeJonge has dressed the actress in standout looks from designer brands including Gucci, Prada and Versace.

“What I love about Olivia is that she has a really good awareness of her body in a fitting, which doesn’t always happen,” Hartstein told WWD. “She really knows how things are supposed to fit her — she’s kind of intuitive when it comes to that. It’s great to dress her because she has such a range. She feels really good in tailoring and a suit, but she also feels great in a bodycon dress. She’s not afraid to play within that range.”

Hartstein said she and DeJonge had several looks they were between choosing for the premiere, but given the large importance and iconic setting of the Cannes Film Festival, decided on the Gucci gown for its dramatic effect.

“For big opportunities like Cannes, it’s such a special red carpet in the sense that it’s really the only opportunity you have as a stylist and as an actress or actor to really take up that space,” she said. “For women, it’s the perfect place for couture just because of the span of the red carpet there, the steps and the lighting. Everything is just kind of the perfect combination to have a major moment.”

DeJonge’s Cannes Gucci gown was one of the many looks Hartstein said gave a subtle nod to Priscilla Presley, as the stylist said the dress’ hue was similar to those Presley wore when she was married to the late musician. DeJonge has also styled her hair in similar ways as Presley and sported some rock n’ roll-inspired looks to pay homage to the figure.

“Priscilla has such a style legacy and Olivia and I have so much respect for that,” she said. “We don’t want to reference it in an obvious way, so it’s all about being subtle in these situations and finding the right piece to reference so it’s not overkill I’d say.”

While DeJonge’s Cannes Gucci gown was perhaps her most memorable, the actress has sported several other standout red carpet looks over the last few weeks such as a black Versace corset-like dress at a screening in London, a silk draped Jonathan Simkhai dress at the London premiere and a pale pink silk organza Prada gown at Sunday’s premiere in Sydney.

With the North America leg of the “Elvis” press tour taking place in the next few weeks — the film officially hits theaters on June 24 — Hartstein explained she’s going to continue her strategy of paying homage to Priscilla Presley in subtle ways while continuing to show DeJonge’s range with her style.

“Creating these looks for big movies and big press tours, it’s really about creating a narrative and connecting the dots between looks,” she said. “I think the people are seeing images of the red carpet can understand what we’re doing and understand the story.”

The Standout Looks From the 2022 Cannes Film Festival