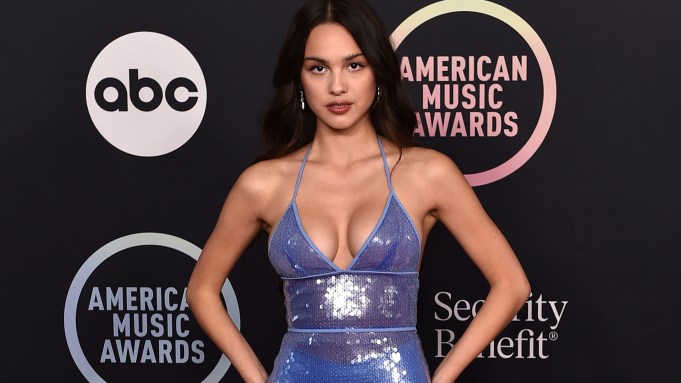 Since her hit single “Drivers License” was released more than a year ago, Olivia Rodrigo has emerged to become a big breakout star in not only music but also in fashion.

The singer became an emblem of embracing the resurgence of Y2K trends last year with her hit songs and their accompanying music videos such as “Deja Vu” and “Good 4 U,” the latter of which paid homage to cult-classic films from the Aughts such as “The Princess Diaries” and “Jennifer’s Body.”

Rodrigo, who first gained recognition due to her role as Nini Salazar-Roberts in the Disney+ series “High School Musical: The Musical: The Series,” has had a hot streak of red carpet style in the last year with the help of the stylist duo Chloe and Chenelle Delgadillo.

During the MTV Video Music Awards in September, Rodrigo looked to Atelier Versace, wearing a pink column gown paired with butterfly earrings. The following day for the 2021 Met Gala, the singer was dressed by Saint Laurent, wearing a black lace catsuit with exaggerated feather detailing on the shoulders.

From there, the singer-actress continued to stun in creations by Saint Laurent, David Koma, Area and Mirror Palais, among many others. Most recently, Rodrigo wore a mini purple strapless corset dress paired with black leather leggings and boots to the iHeartRadio Music Awards, where she took home three awards.

Rodrigo initially rose to fame as an actress in the Disney Channel series “Bizaardvark” as Paige Olvera and the Disney+ series “High School Musical: The Musical: The Series.”

In January 2021, Rodrigo became a worldwide phenomenon for her hit single “Drivers License,” which became a well-known breakup anthem at the time, as well as one of the most popular hits of last year. She followed up the success of the single with her album “Sour,” which came out in May.

For the upcoming Grammy Awards, Rodrigo received a total of seven nominations, including the coveted categories of Album of the Year and Record of the Year for “Sour” and “Drivers License,” respectively.

In celebration of Rodrigo’s documentary, WWD rounded up some of the singer’s best fashion moments. Click through the gallery to see more.