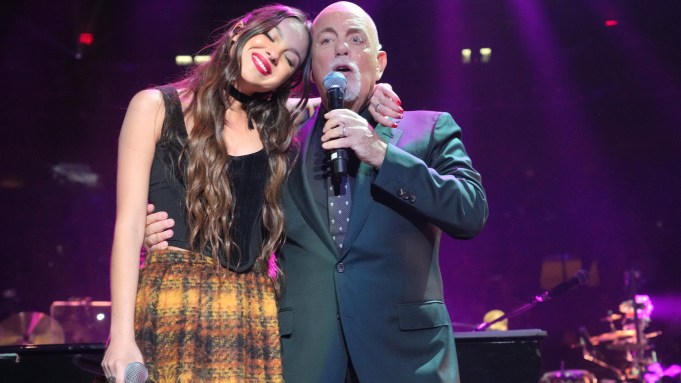 Olivia Rodrigo is staying true to her essence of punk rock princess.

On Wednesday, the Grammy-winning singer took fans by surprise when she joined Billy Joel on stage during his concert at Madison Square Garden in New York City.

For the appearance, she wore a vintage Vivienne Westwood corset, sourced from Tab Vintage, with an orange tartan wool miniskirt paired with tights, black combat boots and a black choker. She styled her hair half-up, half-down in loose curls and rocked a dark pink lip.

She was styled by duo Chloe and Chenelle Delgadillo, who also works with Kali Uchis, Willow Smith and Sza.

During his concert, the beginning of “Deja Vu” started playing before Joel introduced Rodrigo.

Her song famously references the famed rock singer and the song in “Deja Vu,” singing the lyrics, “I’ll bet that she knows Billy Joel/’Cause you played her ‘Uptown Girl.’”

After the track, the two hugged before saying they would sing the song that was just referenced in “Deja Vu,” and the duo started performing “Uptown Girl,” trading verses throughout.

At the end, Rodrigo thanked and hugged Joel once more, saying, “Thank you, Billy. I love you.”