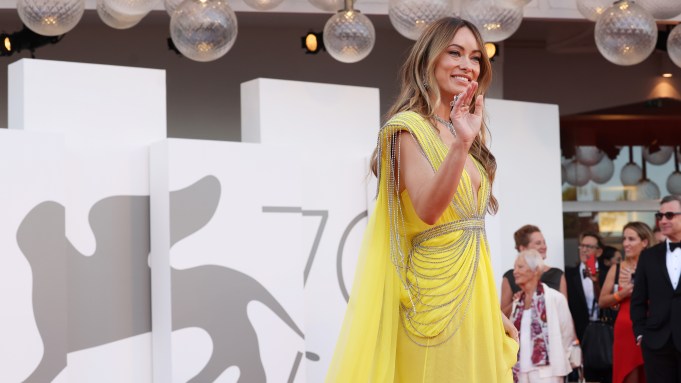 Olivia Wilde had a standout fashion moment at the latest premiere of “Don’t Worry Darling.”

On Monday, the actress-turned-director attended the Venice Film Festival for her newest movie in a custom look by Gucci, which featured a yellow deep v-neck gown overlaid with rays of crystal embroidery and organza floral hem detail. She topped off her look with jewelry also by the Italian luxury fashion label.

She was styled by Karla Welch, who also works with the likes of Hailey Bieber, Tracee Ellis Ross and Megan Rapinoe.

Fans, especially those of Harry Styles, and movie enthusiasts alike have been looking forward to watching “Don’t Worry Darling,” which marks Wilde’s second feature film. It stars Styles and Pugh in the lead roles.

The psychological thriller tells the story of Jack and Alice Chambers, a young couple in the ’50s living in Victory, California, a company town that has been created and paid for by the company Jack works for. Alice becomes curious about her husband’s line of work, which causes tension between the couple and their seemingly utopian lives.

The film, which premieres in theaters Sept. 23, also stars Nick Kroll, Chris Pine, Sydney Chandler, Gemma Chan and Wilde herself, all of whom play supporting roles.

The 79th edition of the festival is taking place until Sept. 10 and will debut some of the year’s most-anticipated films, such as the biographical drama on Marilyn Monroe “Blonde,” “The Whale,” “The Son,” “White Noise” and “Bones & All,” among others.

PHOTOS: Stars on the red carpet at Venice Film Festival 2022