Olivier Rousteing greeted the first in line, who had been waiting since 2 p.m. the day before. 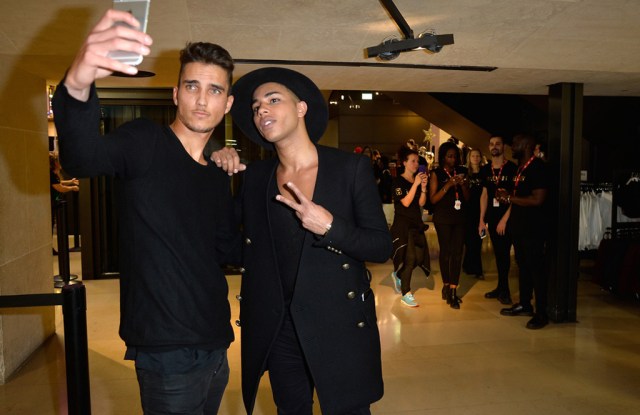 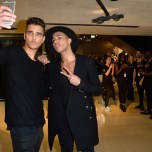 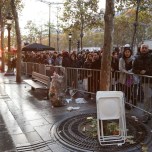 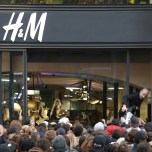 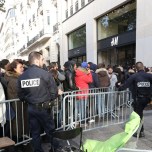 Olivier Rousteing now has a citizens army in addition to his model army, judging from the thousands of customers who on Thursday descended on 250 H&M stores worldwide to buy a piece of the Balmain creative director’s collection for the Swedish fast-fashion giant.

“Balmain x H&M has truly exceeded our expectations,” said Daniel Kulle, president of H&M North America, noting that the 109-item limited-edition line launched in 55 U.S. units. “We are incredibly pleased with the reception and demand for this collaboration.”

Rousteing’s most ardent fans camped outside stores a day, or two days in the case of a Washington, D.C. unit, before the launch. “There’s an enthusiastic response, a really incredible response,” H&M said. “The lines to get into stores were much bigger than” previous designer collaborations.

On Thursday morning, Rousteing made an appearance at the H&M flagship on the Avenue des Champs-Elysées in Paris for the collection’s launch, although the social media star kept his presence low-key. Rousteing snuck into the Paris store in the early hours through a back entrance “for security reasons,” an H&M spokeswoman said. Inside, he greeted a die-hard fan who had been waiting in line since 2 p.m. the day before and — naturally — posed for a selfie.

Some stores had a wait of several hours to get in. In London, shoppers started gathering in front of the Oxford Street store as early as Tuesday at 3 p.m., while the nearby Regent Street location saw fans lining up Wednesday at 10 a.m.

One of the earliest to arrive at the Regent Street store was Morgan Jay. “I was actually planning to get here last night, after work but it started to rain, so I came at this time instead,” said Jay. “When I arrived, there were 15 people already in front of me. There was a girl who came at 10 a.m.” The 28-year-old, who came prepared with a foldable chair, double socks, an extralarge umbrella and a raincoat, was fixated on one piece from the collection. “I’m going to fight for the embroidered men’s jacket,” Jay said. “That’s the main one that I want, and anything else that I can get is just a bonus.”

Ruje Yasmin, 26, started queuing yesterday at 4 p.m. with a friend who arrived three hours earlier. “We really love Balmain,” said Yasmin. “So we’re both looking to buy the black beaded dress, the necklace and the gladiator shoes. Maybe the green velvet dress, but we’ll see. Those are the main to-buys on my list.” Asked about braving the cold, and about her sleeping plans for the night, Yasmin, dressed in a thick cape and snood, said: “We’ve brought extra clothes for tomorrow, but my friend has gone to get her car. I guess we’re going to sleep in the car. Hopefully she parks close by.”

University of Arts London students were among the first to flock to Regent Street. Ellis Gorstejn, a public relations student, arrived at 11 p.m. Wednesday night. “It’s the first time in my life doing something like this,” said Gorstejn. “I’m a huge fan of the designer himself, but not the celebrities who took part in the campaign. I couldn’t care less about Kendall Jenner.” Federico Zonni, another University of Arts student, also noted he was a big Rousteing fan, but his main goal was to sell on some of the pieces he planned to buy.

After a long wait, Adwoba Sekyim-Kwandoh was one of the first few to emerge out of the flagship with bags in tow. “I got the white blazer that Jourdan Dunn wore, the basic T-shirt and another black blazer that Kim Kardashian was wearing. Seeing them in the clothes definitely influenced my decision to come here,” said Sekyim-Kwandoh. Travis Nguyen, a stylist who flew from Vietnam for the event, was another happy shopper. “I managed to get the red leather jacket, now I can go to the airport and fly back to Vietnam satisfied.”

In Milan, at the Swedish retailer’s new flagship at Piazza del Duomo, the mixed crowd of twentysomething students and Balmain fans in their mid-30s eagerly awaited the launch, forming a line that almost reached the historic shopping arcade Galleria Vittorio Emanuele II. Waiting since 6 a.m., some fans had camped outside the store with chairs to secure their spots in the line for the bracelets, hoping to snatch one of the double-breasted jackets with gold buttons — a favorite among the crowd. Ten minutes to the opening, store associates said only men’s bracelets were left to distribute, leaving some female fans, who had arrived later, to give up their spots in the line.

“It was crazy for us, because we had fans waiting since midnight in front of the store, but we were very organized,” said a sales adviser from the Milan store, adding that the number of staff in the store was doubled to 80 people, compared to 40 during normal business days. “We sold out completely one hour ago, at 1 p.m.”

“The collection has been a huge success and we are extremely pleased with the response in the stores in all of our markets,” Kulle said. However, he noted that high fashion doesn’t necessarily play in Peoria. “We’ve learned from previous guest designer collaborations that this type of collection sells best in large city stores.”

The retailer said it was too early to say whether the collection would sell out completely, but U.S. sources said that by Thursday afternoon it looked like a lot of the products were already out of stock.

“This is an exclusive and limited one-off collection, so it will eventually sell out,” Kulle said.

If Tuesday’s Balmain x H&M pre-shopping event for editors in New York is any indication, the products won’t be on racks and shelves for long; the event was stripped clean.

With prices in the U.S. ranging from $17.99 to $649, “pieces are slightly higher in price because of the intricate detailing, embroidery and beading,” Kulle said. A black-and-white beaded dress with 250,000 hand-sewn beads is the most expensive item at $649.

H&M placed an in-store limit of two items per style per customer, with an online limit of one item per style per customer. But that didn’t stop shoppers from going to resale sites such as eBay, where the $649 black, white and gold beaded dress on Thursday was listed for $1,600; a beaded velvet dress, $1,400 and a beaded blazer worn by Kendall Jenner, $1,200.

Rousteing’s social media savvy helped raise the profile of Balmain x H&M. News of the partnership was unveiled at the Billboard Music Awards on Oct. 17, where Rousteing and his besties Kendall Jenner and Jourdan Dunn walked the red carpet, revealing the first pieces of the collaboration. Through social media, H&M and Balmain launched #HMBalmaination.

The Swedish retailer in recent years has adopted a strategy of revealng its designer hookups at popular events. For example, news of Alexander Wang’s 2014 partnership with H&M was released during the Coachella Music Festival at a party for 700 of the designer’s closest friends.

Balmain x H&M got another boost with an Oct. 20 runway show in New York where Jenner, Dunn and Gigi Hadid walked and the Backstreet Boys performed a surprise set. The runway show and performance was intensely hyped through social media. The event featured a pop-up store, as many of H&M’s marketing vehicles do.

In the center of the pop-up shop stood Rousteing, foretelling the future of his H&M project. “I’m so happy. I’m so proud. It’s like a big achievement as a designer and as a person,” he said. “Tonight is just the pop-up store. On Nov. 5, it’ll be available to the whole world. This is just the beginning.”