The curator's latest fashion performance presents an intimate perspective on the creative process as well as the ephemerality of fashion. 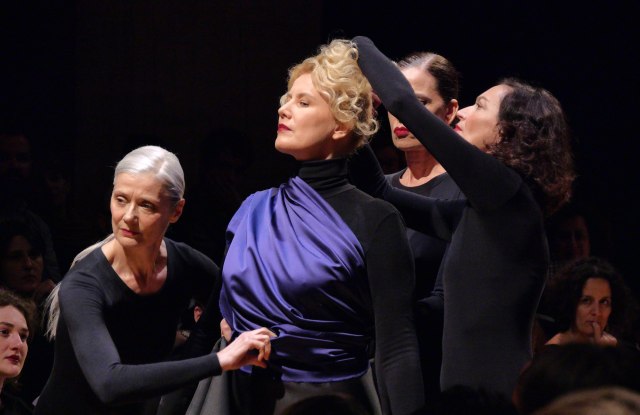 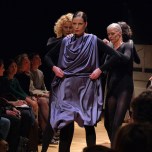 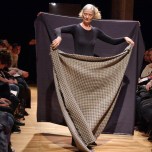 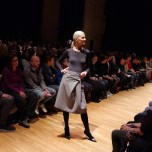 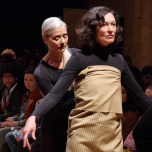 BARE ESSENTIALS: Designers looking for tips on how to stage a fashion show on a shoestring budget should check out curator Olivier Saillard’s latest piece, “Couture Essentielle,” which wraps tonight at the Centre National de la Danse in Pantin, France, on the outskirts of Paris. “The challenge was to create the cheapest fashion show ever produced,” quipped Saillard backstage following the Wednesday night performance of the show. “We bought some pieces of fabrics totaling around 150 euros [$162 at current exchange rates], asked four models to walk and then we set about inventing,” he added. “I liked the idea of creating a show that disappears as it takes place.”

Clad in black leotards, tights and Roger Vivier heels, veteran models Christine Bergstrom, Axelle Doué, Claudia Huidobro and Anne Rohart throughout the performance took turns to create silhouettes out of single squares of fabric, draping them around their body with the solemnity of a couturier in front of mirrors positioned at the end of the aisles. The other models would then move in and fix the looks into place with their hands before marching in a pack up and down the aisles, mock catwalk style.

Taking in the show were Jean Paul Gaultier, Martine Sitbon and Elie Top.

Discussing ideas for future projects, meanwhile, Saillard said it would be his dream to select a range of his favorite shows and re-create them. He has already approached Yohji Yamamoto to propose a restaging of his 1998 “Wedding” collection. The designer seemed up for it, he said, though nothing concrete is lined up for now. “It’s quite tricky because a lot of fashion designers are not comfortable about the idea of presenting a past collection in its entirety today, but a collection can say a lot about a period.”

In June, Saillard will stage an exhibition on traditional Spanish costume at the Maison de Victor Hugo in Paris, as well as an ephemeral fashion museum at the Palazzo Pitti in Florence, in tandem with the Pitti Uomo men’s trade show. The curator in September will open an exhibition on Mariano Fortuny at the Palais Galliera, as the museum’s director. He’s also busy preparing for the Margiela retrospective planned for the Palais Galliera next year. “It’s a very simple project but based on some ideas that are quite subversive. Wait and see.”