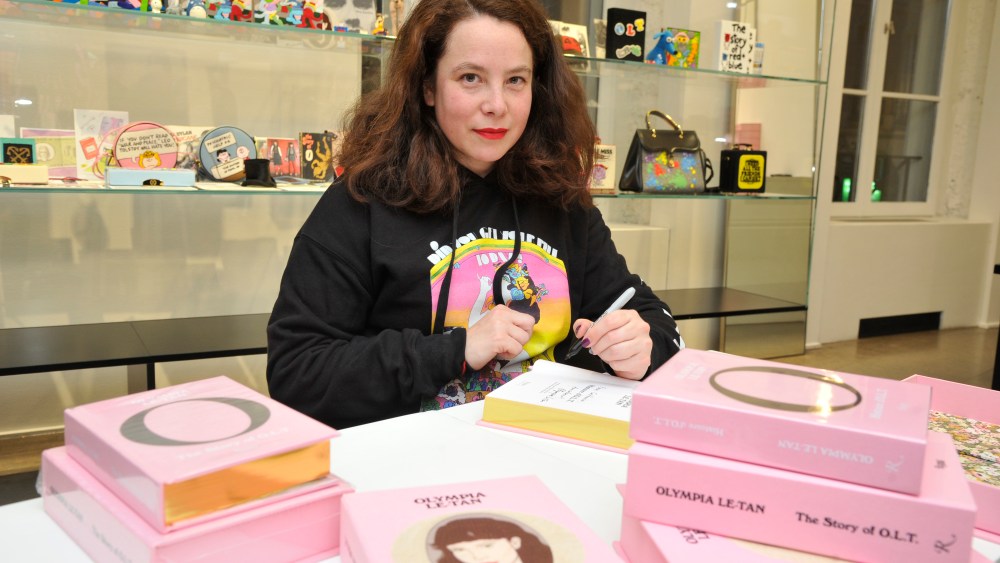 BOOKISH TYPE: A crowd gathered at Colette in Paris on Wednesday night to have copies of “Olympia Le-Tan, The Story of O.L.T. Friends” signed by the designer.

The book published by Rizzoli resembles the whimsical book clutches for which she is known. Its inside is crammed with illustrations, sources of inspiration and photos of Le-Tan’s friends, including Camille Bidault-Waddington, Camille Rowe-Pourcheresse, Léa Seydoux, André Saraiva and Lily McMenamy, plus images of family members. Art direction for the tome priced at $85 was overseen by Thomas Lenthal.

“I wasn’t sure I had enough content and thought that I was too young, but Thomas convinced me to do it,” Le-Tan explained. “He said: ‘Come on, we’ll do like a scrapbook [of] Instagram [posts].'”

Each chapters corresponds to the theme of one of her collections, running the gamut from “You can’t judge a book by its cover” to “Framed.” “With Olympia, everything is neatly organized,” he said.

“Yes, she inherited that from me and her father,” said her mother, Plum Le-Tan.

The proud dad, artist and illustrator Pierre Le-Tan, who wrote the tome’s forward, said: “The book is formidable.” He has an exhibition in December at a gallery on Rue Saint-Honoré and a book in the pipeline with Louis Vuitton, which will involve portraits of clients since the house’s creation.

Victoire de Castellane appears in Le-Tan’s book as Anita Ekberg in “La Dolce Vita,” photographed by Max Farago in a staircase in Paris. De Castellane is a very organized person, too.

Vincent Darré also has a book to be published by Rizzoli in the works, slated for fall 2017. “It gives Olympia the time to sell off her books,” the interior designer teased, flashing her a smile. His personal collection of furniture, lamps and drawings will go under the hammer on Nov. 23 at Paris auction house Piasa.

“Pour ma taupe” (or “For my mole”), wrote Le-Tan on Elie Top’s copy, making wordplay with his last name and an affectionate nickname. The jewelry designer has recently created three pieces in wood, including ebony, and colored stones. “I replaced metal with wood,” he said, of the unique designs.

Next stops for Le-Tan are Tokyo, for a signing at Bookmarc on Nov. 16, and then London, where she will be at Hatchards on Nov. 24 and at the Edition Hotel on Nov. 28.