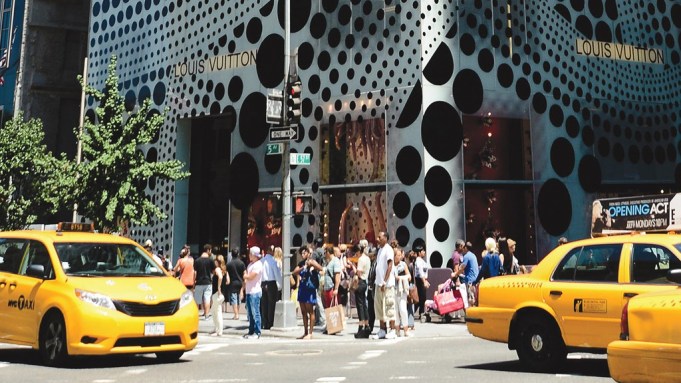 ON THE DOT: At 12:30 on Tuesday afternoon, anyone within a five-block radius of 57th Street and Fifth Avenue in New York City was seeing spots as Yayoi Kusama’s artistic treatment of the Louis Vuitton maison windows was unveiled. How many black polka dots had been emblazoned on the building is anyone’s guess. “The number of dots is so obsessive, no one can count them,” said Louis Vuitton chairman and chief executive officer Yves Carcelle a few minutes before he did the honors, flanked by two babes dressed in white uniforms and flame-colored blunt bob wigs to match Kusama’s hairdo.

The artist made a grand entrance via polka-dotted wheelchair, and seemed to love every minute of it, as she emerged from the Vuitton store hands raised Evita Peron-style, basking in applause and the glaring sun (it was a scorcher). Once Kusama took the mic, her message was happiness.

The window installation put a smile on one’s face with its undulating inflatable tentacles done in red-and-white polka dots, plus a miniature of Kusama. But no merch — “That was the idea,” said Carcelle of the conspicuous absence of bags in the windows. “When you work with an artist, it’s not a commercial operation. And as somebody once said, the window is the invitation but the store is the party.”