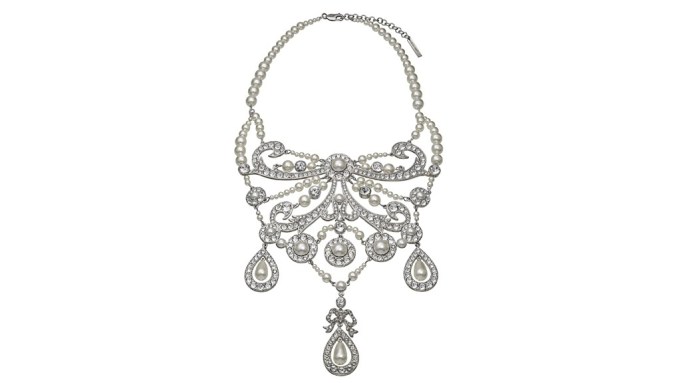 ON THE ROCKS: “It’s like a little market square,” said Markus Langes-Swarovski about the exhibition-cum-cocktail the Swarovski heir threw in Paris on Thursday evening. The one-night-only event, set around a giant ice block dripping with jewels, boasted key pieces from more than 50 designer collaborations the Austrian crystal-maker has engaged in, including those with Karl Lagerfeld, Jean Paul Gaultier and Alexis Mabille. It was shown to buyers and potential clients — including designers — indicating what’s possible with the premium crystal.

Langes-Swarovski, who is also a spokesman for the brand’s executive board, said with competition close on its heels, the company’s only way forward was through the development of new technologies. A case in point is Swarovski’s venture into textiles, a mesh fabric done entirely with Xilion-cut Chatons, for which the house holds the copyright.

“We prelaunched it at Versace’s couture show in July, but it will be available to everybody this fall,” he said.

Among the technological standouts at the event was a pointed black stone, which Langes-Swarovski referred to as the Stalactite. Custom-made for Gaultier, it gave a punk-chic edge to a three-tiered bracelet. Ones to watch included May Moma, with a spiderlike necklace featuring bold stones wrapped in a misty fabric, creating a delightfully retro, weblike effect, and Claudia Arbex, showing the delicately undulating shapes of her Wave collection.