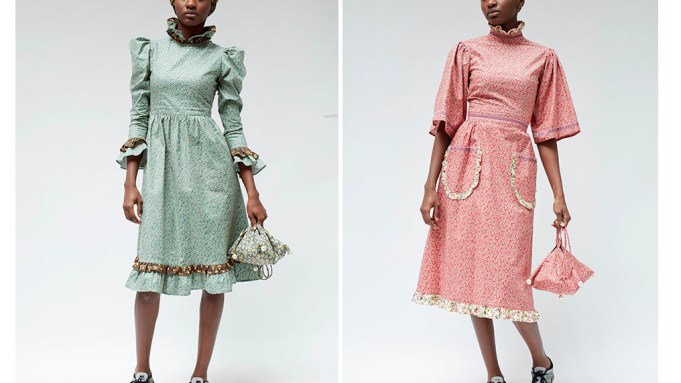 Amid a moment of evolving gender norms, Batsheva Hay — a former litigator — is looking to spin an empowered narrative from over-the-top modesty. In a single season, her namesake dress brand, Batsheva, has found a following, nearly selling out at Opening Ceremony.

For fall 2018, Hay has expanded the line to include an assortment of matching fabric handbags — each fashioned to look like small babushka pouches.

Hay, the wife of photographer Alexei Hay, embarked on the project as a post-partum hobby. “After quitting my legal job and having two kids I felt like I was wasting my intelligence and energy. I just had the desire to make some clothes I wanted to wear,” the native New Yorker explained.

“In motherhood I had a weird identity shift and body shift and I didn’t enjoy shopping anymore, I didn’t like anything except my old vintage clothes. They were in complete disrepair and I went to remake one of them with the simple idea to try to make one creative project for myself. But I got hooked,” Hay added.

Her daughter then became envious of the designs, and thus Hay began designing miniature-sized companions for children.

The success of Batsheva’s modesty could be taken as an example of shifting feminine ideals, particularly as the #MeToo movement heralds new favor for oversize silhouettes — eclipsing the form-fitting, more suggestive fashions that had been favored recently.

“Just becoming a mother and getting older, all of this stuff made me think how I didn’t want to be showing everything off. It’s tiring having to worry about things popping out. This you just slip on and it feels like a smock or robe — its comfortable but also adventurous and quirky,” she said.

Hay admires Eighties and Nineties brands such as Laura Ashley, Betsey Johnson and Norma Kamali for their level of quality and design integrity, relative to their prices.

“They have a real point-of-view, it’s the kind of brand that’s not cheap but they are accessible. I could save up for them as a Queens girl.” She has found inspiration in this pricing structure, marking her own dresses between $300 and $500. The brand’s new handbags will sell for $175. They will be stocked on Matchesfashion.com beginning in May.