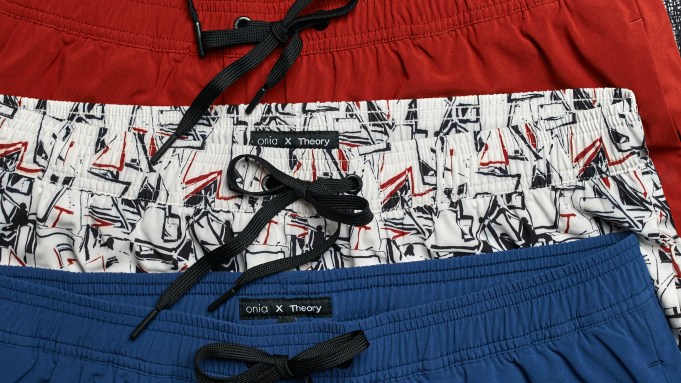 SWIM TEAM: Onia and Theory are partnering up. The New York-based swimwear line is creating a men’s capsule collection with the contemporary brand.

The limited-edition trunks, which will be available at Theory stores globally starting this month, include a high-tech version of Onia’s Charles style. The trunks are made from a fast-drying, bonded fabric that features four-way stretch and a water–resistant finish. They will be available in six colors and will retail from $175 for solids and $195 for prints.

“We’ve been selling in Theory stores for the past three years and the collection does well,” said Carl Cunow, Onia’s cofounder. “With this collaboration we are building a bigger partnership.”

According to Cunow, Onia is in growth mode. He said the brand, which also produces private label swimwear for retailers including Saks Fifth Avenue and Brooklyn Industries, grew by 40 percent from 2014 to 2015. Since launching the business in 2009, Onia has introduced three other brands that sit under The Onia Group: Trunks Surf and Swim for men and Sole East for women, which target department stores including Nordstrom and Bloomingdale’s, and Teal Cove, which is aimed at mass market stores such as Steinmart.