The fund-raiser, being held this weekend, has raised $1 million this year and more than $18 million overall for the protection and preservation of the Lake Tahoe Basin.

Saks Fifth Avenue and The League to Save Lake Tahoe present Oscar de la Renta show at Lake Tahoe on August 5, 2017 at The Schumacher Family Home in Incline Village, CA.

When models walked the runway at the League to Save Lake Tahoe’s fund-raiser in 1969, they were barefoot on a beach.

“It was raw,” said Saks Fifth Avenue’s president Marc Metrick, of the original setting. “It was fashion at its core.”

Held at a Rubicon Bay beach house on the lake, the function began as a collaboration between the late Bill Blass and Saks Fifth Avenue’s James J. Ludwig, a vice president and general manager of the retailer’s San Francisco branch at the time. Along with Eugene Levin, owner of Maurice Rentner (Blass was its designer), they took notice of Bay Area customers vacationing in Lake Tahoe for the summer and relocated their habitual fall presentation, usually held in August, to the Sierra Nevada area.

“It moved from a fashion show with boxed lunches — literally, there were boxed picnic lunches — to an involved community event,” continued Metrick.

What started as an intimate show has evolved into a significant production that has raised $1 million this year and a total of more than $18 million for programs dedicated to the protection and preservation of the Lake Tahoe Basin. The affair, which now showcases Oscar de la Renta designs, celebrates its 50th anniversary this weekend.

“Oscar and Bill were good friends,” shared Oscar de la Renta’s chief executive officer Alex Bolen, son-in-law of the late designer. “Oscar heard a lot from Bill about what a great event it was, what a great group of people.” 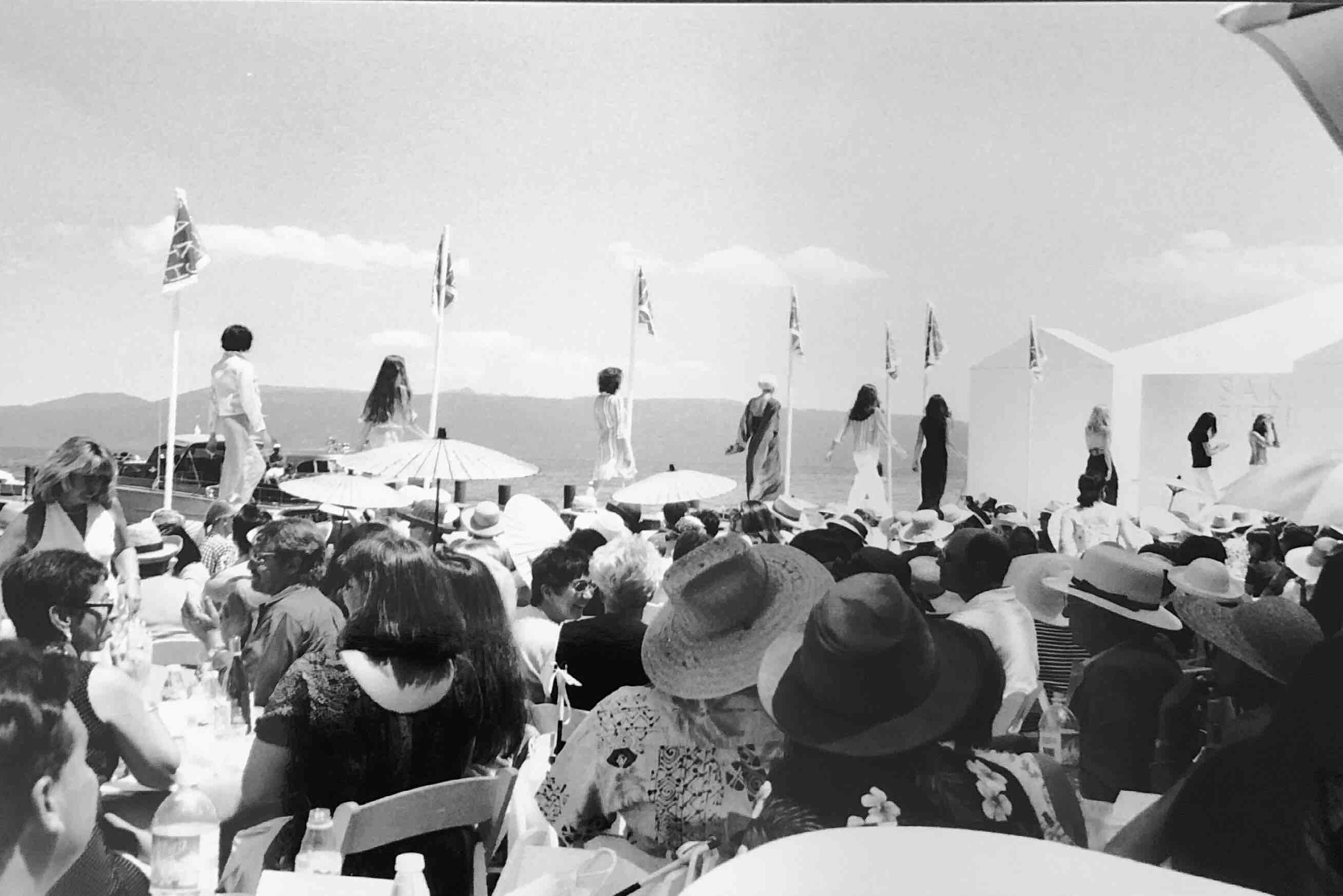 A Bill Blass production in the 1980s  Courtesy Photo

De la Renta took the reins in 1995 at the request of Ludwig, after Blass fell ill. The event then went on hiatus until 1999, when Blass had his final show, notably serving his famed meatloaf dish and sharing his recipe with guests. It wasn’t until 2002 that de la Renta began regularly serving as designer at the cause, up until his passing. In 2016, Laura Kim and Fernando Garcia were named co-creative directors of the label and have handled the event since.

“Laura and Fernando, of course, worked on this event with Oscar for a long time as Oscar’s assistants,” said Bolen, who’s been attending for more than 15 years. “They attended even one year when Oscar was still in charge of the design studio, so for them, it was natural to get involved with this.”

“July and August are a surprisingly busy time for us, as we’re getting ready for September’s fashion week, so we’re grinding away here, and the opportunity to take ourselves out of that and go to Lake Tahoe is a real treat,” continued Bolen. “The event really is something we look forward to all year long. Of course, it’s a company event, but we bring our family along.…And the fact that we’re helping preserve Lake Tahoe, which really is a national treasure, is all the better. We’re thrilled to be associated with that.”

The fund-raiser is also a chance for the brand to engage with customers in a “close and consistent way,” said Bolen. “The fact that we’ve done this year after year, we have a lot of old friends that we see every year, and we make a lot of new friends every year. So, I think the idea for us to really talk to, spend time with, have lunch with, have dinner with our customers is a really unique opportunity. 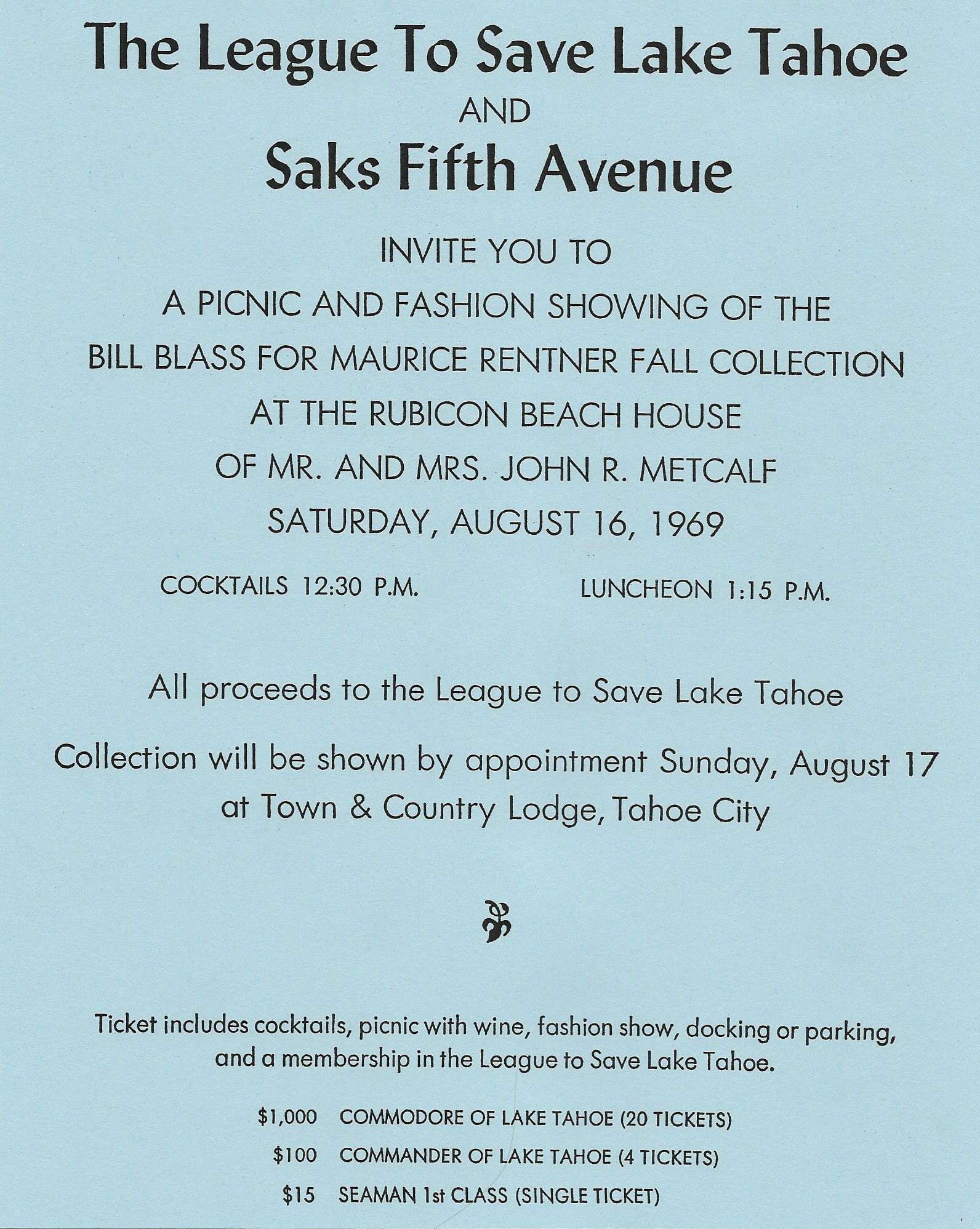 The League to Save Lake Tahoe’s 1969 invitation  Courtesy Photo

Metrick shared similar sentiments, noting the importance of getting involved in sustainability and social responsibility: “Saks is always looking to connect with the consumer in an intimate way, and this has been an exciting way to do that. That’s where it all began.…As Saks is modernizing, we are creating more intimate connections with our customers — all our customers. Some of the things that are part of our legacy and our heritage have become even more important.

“Oscar is iconic,” he continued. “The brand is so special — special to Saks, special because it means so much to the industry. It’s Americana and hits home with everybody. What Laura and Fernando have been able to do, and this whole way they’re approaching the brand, exactly lines up with what Saks is doing. It’s about the heritage and meaning of a brand…modernizing to reach this new customer in luxury.” 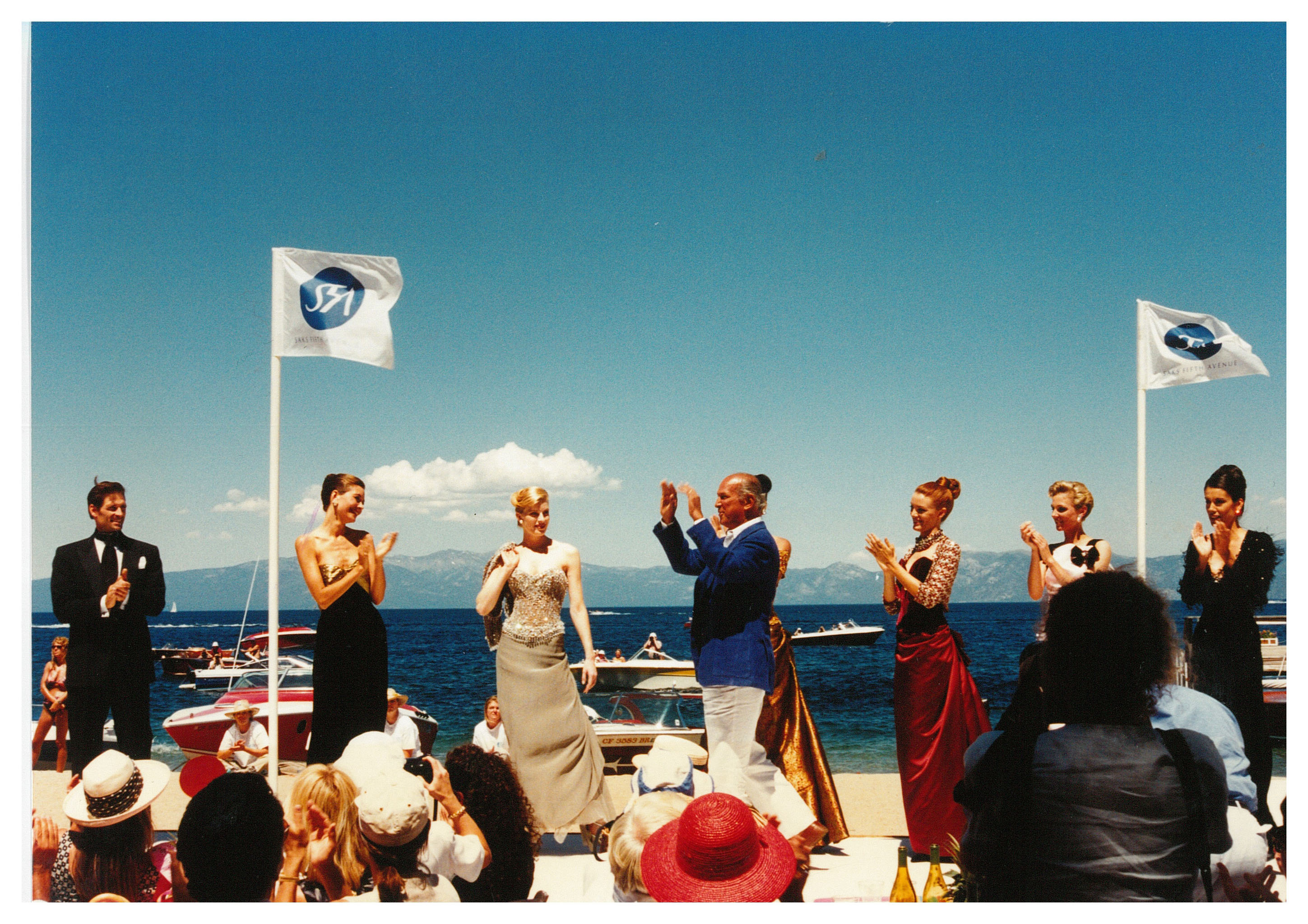 Oscar de la Renta presents at the League to Save Lake Tahoe benefit.

For the milestone anniversary, the weekend kicks off Friday night with a welcome dinner for a select few. On Saturday, the day begins at 11 a.m. with a cocktail and silent auction, followed by the AT&T-sponsored luncheon, and of course, the fashion show, displaying Oscar de la Renta’s pre-spring 2020 collection for the first time to consumers. They’re expecting a record 600 to 700 guests.

There’s also an auction, which includes two front-row tickets to the house’s New York Fashion Week show, and a trunk show, held in memory of Edith Andrews Tobin, a former League to Save Lake Tahoe board member who passed away earlier this year and whose parents were greatly involved in the charity show.

The cause works to restore the wetlands and habitat, conduct weed control and fight pollution. This year, the message is focused on the impact of climate change.

“You’re just really blown away by the beauty of it and the crystal-clear water,” Bolen said of his first impressions of the geographical area.

“On some level, we like to associate our brand with beautiful things,” he continued. “If people walk away from this thinking that our collection met up to the great beauty of Lake Tahoe, we’ve achieved our mission.”