Peter Copping hosted a restaging of his fall 2015 collection in honor of the new collaboration at the city’s Museum of Contemporary Arts. 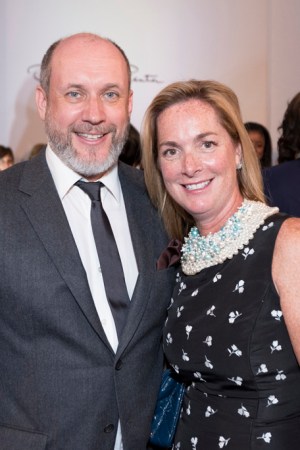 “It’s great to come to Chicago. I couldn’t think of anywhere better to start,” Peter Copping said on Monday afternoon. Oscar de la Renta’s newly minted creative director was in the Midwest for his first time, hosting a restaging of his fall 2015 collection in partnership with Saks Fifth Avenue and A Better Chicago. “This is a city I like very much,” Copping continued, speaking moments before his collection hit the makeshift runway, erected in the city’s Museum of Contemporary Arts. “Women here like dressing up. They’re very fond of clothes and fashion. It’s nice to come where you’ll know there will be a real appreciation of things. I’m definitely excited to speak to the women and get some feedback.”

Charming clients was an art that de la Renta mastered and remains an integral part of the brand’s DNA. This is the first client engagement Copping has done at the house. “I do like that people aren’t shy and they’ll come up and talk,” the designer said, when asked about engaging with American customers. “Coming from Europe and spending 20 years in Paris, people are more reserved there,” he said. Following the show, Copping mingled with giddy clients. “I think we all will soon be under the Peter spell,” said Toni Canada, a socialite and vice president of the American Medical Association. “It was a real treat to meet Peter. I was a huge fan of his when he was with Nina Ricci and I’m looking forward to seeing what he does with Oscar de la Renta. I’ve been lucky enough to attend quite a few of Oscar’s shows prior to his passing and had the pleasure of meeting Oscar last year in New York after one of his shows. What a gentleman.” She assessed the collection as “young and fresh—much shorter hemlines than we have seen from the brand.”

Joy Sandler, brand ambassador for Oscar de la Renta at Saks, praised the collection—and the new designer. “He’s very approachable and that’s very much in the tradition of Oscar,” she said. In head to toe Oscar, client Susan Noyes recalled meeting de la Renta on more than one occasion. “He just exuded charm. You wanted him to be your best friend and your tastemaker,” she said.