Oscar de la Renta was unflattered when a staff member saw some looks by Max Mara Studio that bore a striking resemblance to his spring 2008 collection. 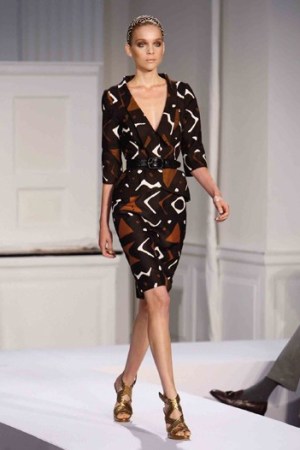 OSCAR TO THE MAX: Oscar de la Renta was most sincerely unflattered when a staff member passed by Lord & Taylor recently and saw some spring looks by Max Mara Studio, the Italian brand’s diffusion line, that bore a striking resemblance to de la Renta’s spring 2008 collection. “The prints and these styles are my clothes from two seasons ago,” de la Renta told WWD.

In addition to similarities in cut and silhouette, a pair of prints are very close, especially a tribal pattern. While de la Renta acknowledged it is often standard practice for mills shopping their own designs to offer a designer a one-year exclusive and then put the print back into circulation, that should not have been the case here. “This particular print is not a print that I bought,” he said. “I gave the Italian house the artwork….This is horrible because Max Mara, you know, they should be more responsible.”

When asked for a comment, a Max Mara Fashion Group spokesman said, “The designers of the Max Mara Studio line chose the printed fabrics in total good faith. [In the Max Mara Studio collection] the prints are applied on different materials and fashioned in styles that are very different from the models designed by Oscar de la Renta. We will, however, speak to the mill that supplied the fabric, because we’re very sorry for what happened.” He also added that Max Mara asks its mills for a one-year exclusive on the prints it selects.

Perhaps so, but de la Renta maintained that “their jacket looks just like mine.” While that specific piece was no longer on the floor at Lord & Taylor for WWD’s examination, a fuzzy cell phone photo taken in a fitting room by the designer’s employee indicates he has a point. In addition, a Max Mara Studio skirt seems similarly proportioned, and its asymmetric tribal pattern placed almost identically to the skirt of a de la Renta wrap dress.

As for the mill in question, Como-based Gentili Mosconi, owner and chairman Francesco Gentili maintains de la Renta doesn’t know his own contracts: “We have a commercial agreement with Oscar de la Renta for which he has the worldwide exclusive on our fabrics, whether designed by us or by him, for one year after which the designs are the property of Gentili Mosconi.”

DESIGNER MEDAL: Karl Lagerfeld will soon be able to add a new silver accessory to his collection, but this one is a strictly limited edition. On Thursday, French President Nicolas Sarkozy will anoint the German designer a Commander of the Legion of Honor, France’s highest civilian award, in a ceremony at the Elysée presidential palace. The honor comes with a silver medal suspended from the collar from a red ribbon, and should look just perfect under one of Lagerfeld’s trademark high-collared shirts from Hilditch & Key.

THEYSKENS’ TOME: Olivier Theyskens took over Liberty’s light-filled women’s wear floor last week to launch “The Other Side of the Picture,” published by Assouline. The tome features images taken by Theyskens’ photographer friend Julien Claessens backstage at the designer’s shows for Nina Ricci, Rochas and his own collections. The shadowy, atmospheric shots span the designer’s work from his debut show in Paris for spring 1999 to his final show for Nina Ricci for fall 2009. “The pictures represent things I never saw, because at that time, backstage, I was always busy — I could never stop and look at something happening,” said Theyskens during the event, which was cohosted by Liberty’s buying director, Ed Burstell, and British journalist Sarah Mower. “When I look back to the pictures, I discover something.” Meanwhile, Theyskens also is gearing up for his collaboration with Theory, called Theyskens Theory, which will launch in September. “I’m superexcited — I was really looking forward to [doing] something like that — it’s going to be very, very interesting,” he said.

ON THE ROAD: New Zealand-born Rebecca Taylor, who is in the midst of revamping her Japanese business with her new partner Itochu Fashion System Co. Ltd., made an appearance in Tokyo last Thursday. The designer schmoozed with local fashion editors and models from Steady magazine — the glossy is doing a story on Taylor’s visit — at a cocktail party in the city’s Harajuku neighborhood. Taylor said this was her 18th visit to the country and she marveled at how much it has changed over that period. “Omotesando, it’s changed so much. When I first came here, it was all those old apartments…now it’s a different city. It just keeps reinventing itself….They show no emotions with regards to buildings. They just tear them down.”

ART AND FILM IN HONG KONG: Oscar-nominated director Baz Luhrmann put in an appearance at the opening of HK Art, which ends today. Luhrmann collaborated with painter Vincent Fantauzzo to create an installation called “The Creek, 1977.” Comprised of old family photographs that culminate in a Caravaggio-inspired painting, the installation has distinctly cinemalike narrative. Luhrmann admitted the work will eventually lead to a film. “This is the world’s most expensive storyboard,” he said. Fantauzzo, whose portrait of Heath Ledger earned plaudits and prizes last year, was also charged with creating a booth for the Sovereign Art Foundation at the fair — no easy task given his broken arm. “It’s all Baz’s fault — he beat me up,” said Fantauzzo, who was, in fact, in a motorcycle accident. The collaboration, in the meantime, is ongoing and interactive, with viewers asked to contribute their interpretations of the story.

Meanwhile, the Louis Vuitton Gallery threw a cocktail party that night to mark the international release of retrospective tome “Complete Works (So Far)” by the Campana Brothers and the opening of an exhibition at the gallery. The brothers — Humberto and Fernando Campana — are best known for creating furniture and fashions out of recycled or unusual materials, such as stuffed animals, carpet and clothing labels. At the party, they unveiled two new pieces “Kowloon Lamp” made from colorful Italian crystal pieces and “Hong Kong Chair,” which has been fashioned out of carpet, plastic, wood, PVC and numerous other materials. “These are the only two pieces in the world, we made them just for this exhibition,” said Humberto Campana. The brightly colored chair caught more than one eye, with Jean-Baptiste Debains, president of Louis Vuitton Asia Pacific, testing it out. “I might need this for my office,” he said.

SILK THREAD: Doing its bit for Italy’s embattled textiles industry, Paris-based concept store Merci has hooked up with venerable Lake Como-based silk manufacturer Mantero for a jewelry line made using reinterpretations of the firm’s printed silk scarves. Dubbed “Silk, Saved from the Flames,” the pieces will go on sale at Merci during Paris Fashion Week in October. From June 21 through July 10, meanwhile, socially-conscious fashion label Edun will install a pop up stand at Merci, offering its fall-winter collection. The presentation will include a multimedia installation focusing on its community programs in Africa: the Conservation Cotton Initiative in Uganda and the Bidii School Project in Kenya. Photographic and video works by Americans Kevin Ito and Peter Sutherland will be on display, as will images of Edun’s collection lensed by British photographer Neil Stewart.