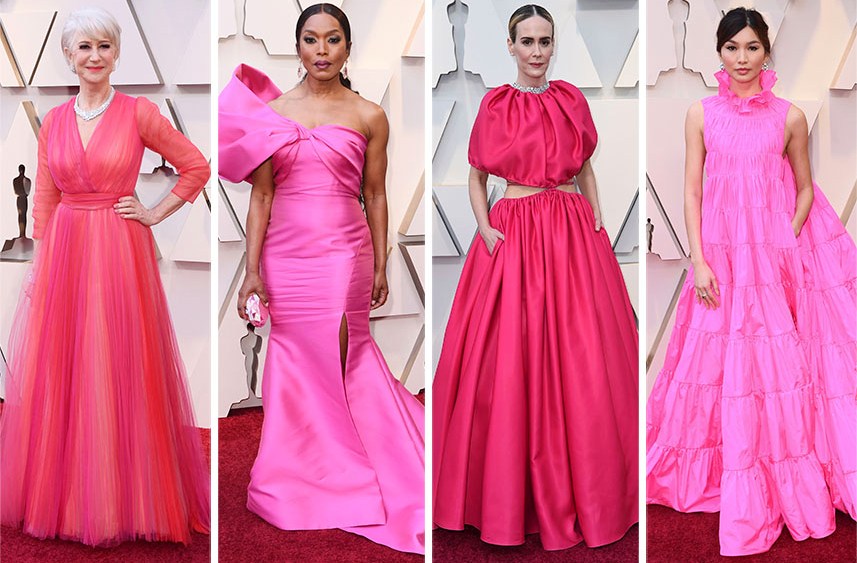 The Oscars red carpet saw a number of standout fashion trends and looks straight from the runway.

Perhaps the biggest trend seen on the red carpet at the 91st annual Academy Awards is stars showing up in an array of pink hues. Angela Bassett arrived at the red carpet wearing a pink Reem Acra gown with an embellished shoulder, Helen Mirren wore a tulle Schiaparelli Couture gown (in the house’s signature color), and Gemma Chan wore a hot pink Valentino gown with a ruffled collar. Wearing one of Karl Lagerfeld’s last Fendi couture looks, Lisa Bonet showed up at the red carpet wearing a gown from the designer’s fall Couture 2018 collection.

Some women opted for pantsuits for their Oscars red carpet looks, including Awkwafina in a metallic lilac suit by Dsquared2, Elsie Fisher in a suit by Thom Browne and Amy Poehler in an all-black suit.

Many brought added drama to the red carpet in the form of capes. Glenn Close, nominated for “Best Actress,” wore a gold gown with matching cape made by designer Wes Gordon for Carolina Herrera. Melissa McCarthy, also opting for a pantsuit, wore a custom Brandon Maxwell outfit complete with a white cape. Maya Rudolph, who helped start the show alongside Poehler and Tina Fey, wore a pink floral gown and a sweeping cape.

The men also brought some excitement to the red carpet, mainly in the vein of velvet suits. Jason Momoa, matching with wife, Bonet, wore a Fendi pale pink velvet suit. Velvet suits were also seen on Stephan James in a custom Etro red suit and Chris Evans in a blue velvet suit.

And then there was Billy Porter bringing the drama to the red carpet in a Christian Siriano velvet tuxedo gown.

Read more on the Oscars here:

All the Oscars 2019 Red Carpet Looks