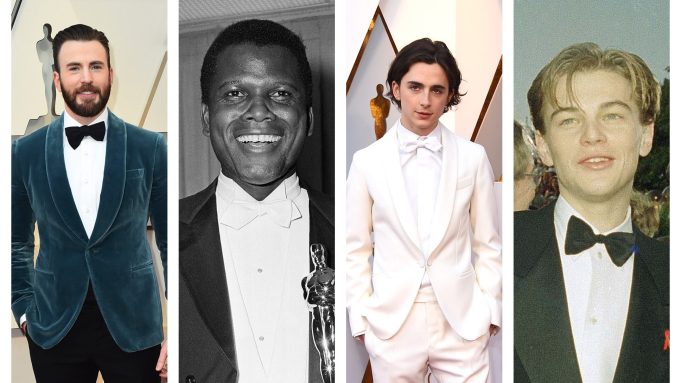 While red carpet dresses usually steal the spotlight each year at the Oscars, the men’s fashion has proven to resonate with fans just as much over time.

Men’s fashion has seen its own evolution on the Oscars red carpet in each decade’s leading Hollywood men, such as Paul Newman, Marlon Brando and Cary Grant in the 1950s and 1960s, and now with the likes of Timothée Chalamet, Michael B. Jordan and Pharrell Williams.

Traditional men’s suiting has always reigned as the popular fashion trend at the Oscars, but in recent years, styles have shifted where men have increasingly looked to bold colors, patterns, textures and modernized takes on the traditional suit. This was most prominently seen during last year’s awards season where many male celebrities eschewed the traditional tux for more couture-like and stylish pieces, such as the hot pink sequined Versace look worn by Colman Domingo or the 1970s-inspired look seen on LaKeith Stanfield at last year’s ceremony.

While this type of experimentation has been popularized in recent years, it wasn’t uncommon in previous decades. Take Oscar-winning actor Sidney Poitier, who won his award in 1964 wearing a suit with coat tails, and musician Sammy Davis Jr., who wore a Nehru-inspired suit in 1968.

Although the more colorful and bold styles have stolen the spotlight among men on the Oscars red carpet, an impeccably tailored, traditional suit can still stand the test of time, such as Michael Fassbender’s Tom Ford tuxedo in 2016 or Rami Malek’s Saint Laurent tuxedo in 2019.

Here, WWD rounds up some of the best men’s fashion of all time at the Oscars. Click through the above gallery for more.

The Best Oscars Red Carpet Dresses of All Time

A Closer Look at the Oscar Best Costume Design Nominees