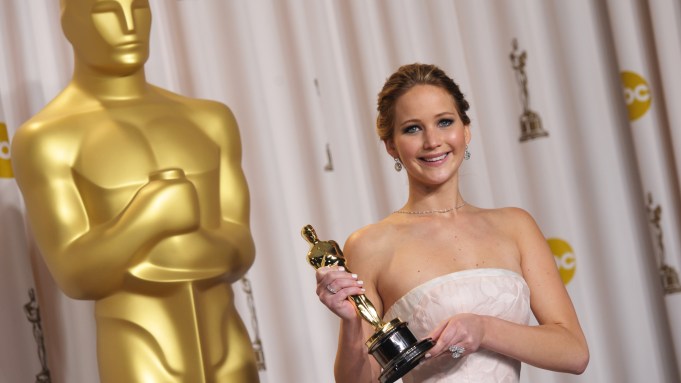 Jennifer Lawrence has left her mark on the Oscars over the last decade, both for her many nominated roles and her standout red carpet style.

Lawrence is the top searched Oscars red carpet star, according to a report from Google that looks at Oscars search history since 2004. Lawrence made her first Oscars appearance in 2011, where she stood out on the red carpet for her custom formfitting Calvin Klein dress. The following year, Lawrence was named a Dior brand ambassador and has since worn couture looks from the design house for all of her latest Oscar appearances.

Lawrence’s most well-known Oscars look was in 2013 where the actress wore a drop-waisted couture dress from the design house when she won her first Academy Award for her role in “Silver Linings Playbook.” Lawrence famously tripped on the couture dress when walking to the stage to accept her award.

Following Lawrence in Google’s ranking is Lady Gaga, who has attended the Oscars multiple times over the last decade. The Oscar-winning singer’s most memorable Oscars look came in 2019, when she won the award for best original song from the film “A Star Is Born.” The singer paired a custom black Alexander McQueen dress and matching gloves with Tiffany & Co.’s legendary yellow diamond, which marked the first time the 143-year-old, 128.5-carat diamond was worn on the red carpet. The diamond had last been worn in public by Audrey Hepburn in 1961 when the actress was doing press for her film “Breakfast at Tiffany’s.”

Lady Gaga is followed by Angelina Jolie, who wore one of the most memorable Oscars looks of all time in 2012: a black Versace dress with a thigh-high slit. Jolie was followed by Jennifer Lopez, Billy Porter Charlize Theron, Anne Hathaway and other celebrities.