A Breguet pocket watch that belonged to Paul Iribe will be auctioned off June 11 at Bonhams’ Fine Watches and Wristwatches Sale.

By Rosemary Feitelberg on May 16, 2013
View Slideshow 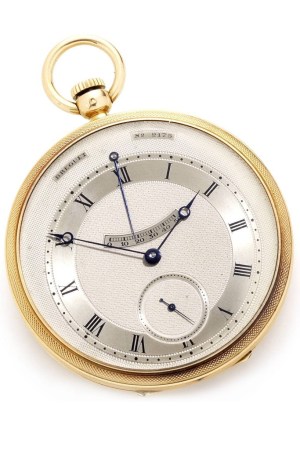 OUT OF TIME: An open face gold Breguet pocket watch that belonged to Coco Chanel’s one-time lover Paul Iribe will go under the gavel June 11 at Bonhams’ Fine Watches and Wristwatches Sale in London.

An illustrator and artist, Iribe crafted film sets in Hollywood before returning to Paris where he met Chanel in the early Twenties. Their connection is believed to have torched his marriage to Maybelle Hogan. Iribe then made a habit of featuring a Chanel-looking woman as Marianne, the symbol of French freedom. The year that Iribe bought the Breguet watch is the same year he and Chanel teamed up to create a jewelry collection commissioned by the International Guild of Diamond Merchants. Made almost entirely with diamonds and platinum gold, their ‘Bijoux de Diamants’ Collection attracted enormous crowds when it was exhibited in Chanel’s home in the Rue du Fauborg-Saint-Honoré in Paris.

Their alliance ended abruptly in 1935, when Iribe died unexpectedly after collapsing while playing tennis at Chanel’s villa in the French Riviera.