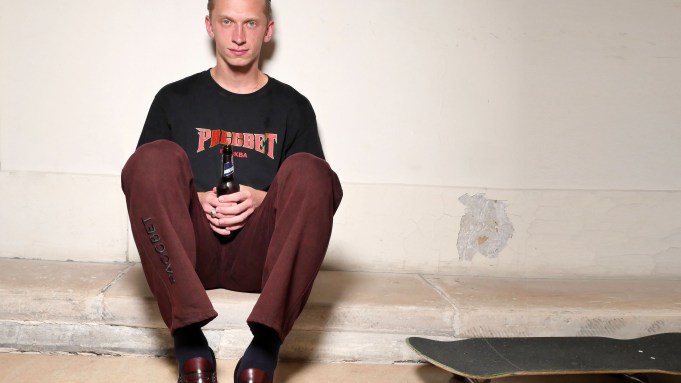 NOW, TOO LATE: Designer Gosha Rubchinskiy and pro skater Tolia Titaev, the founding pair behind achingly cool skater brand Paccbet (pronounced “rassvet” and meaning “dawn” in Russian) were running late. In the courtyard of the Comme des Garçons Trading Museum on Rue Saint-Honoré in Paris, a motley crew was already taking a look at the new merch from the label’s second offering.

Skater Rudolf Kurzanov — a recurrent figure in their crew who was pictured in the previous Paccbet look book, walked in the latest Rubchinskiy show and was also featured in the designer’s Transfiguration project in 2009 — sat on his skateboard, propelling himself forward with his feet.

On the rails were new versions of the label’s caps, T-shirts and hoodies, screen-printed or embroidered with the brand name and logo — sometimes both. Boards were going for 80 euros. This iteration’s novelty, denim jackets and jeans retailing at 562 and 296 euros were available in a charcoal gray and bottle green. They too were embroidered with a simple Paccbet on the arm or leg.

“This season, we just showed simple stuff again, but a bit more about creativity,” the pro skater said, as he and Rubchinskiy signed items. Business was brisk. “The pants are perfect for skating. They’re good quality, don’t get holes straight away. It’s like my classic shape, so a little bit short in the leg, roomier, too. It’s cool. Just a logo here,” he indicated, pointing to the black cherry pair he was sporting, embroidered down the leg and with a leather label featuring the rising sun logo of the brand on the back. “From dawn, you can start a new life, it’s cool. Even if you hurt yourself, on the next morning you can skate again,” he added.

Alongside the skater wares were a zine and a short documentary, both captured during the crew’s trip to Southern California in February.

The zine, titled “Goodbye America,” was shot by photographers Sasha Mademuaselle and Sergey Kostromin, and formed a visual diary of the trip, capturing its atmosphere. Titaev provided the illustrations that pepper the pages. The limited edition of 170, exclusive to Dover Street Market locations and the Trading Museum, retailed for 20 euros. They too were being snapped up, as stock for caps, beanies and Ts were running low.

In the video, created in collaboration with Inrussia and premiering on Wednesday on doverstreetmarket.com, the Paccbet crew — Titaev and fellow skaters Gleb Bukhgolts, Nikita Dedov and Julian Klincewicz — ride through hot spots and meet American figures of the milieu such as pros Alic Cox and Dolan Stearns.

Some they already knew; others were met along the way, like punk skate photographer Ryan Allan. “We just wanted to show how the Russians roll in America,” he said. “Go around, see friends, that’s about it.”

“It’s about people, kids who want to do something. Nowadays, we have a lot of fake information about what’s happening in Russia. That kind of project shows the reality of Russia and its kids,” Rubchinskiy said. Mademuaselle and Kostromin’s pictures capture scenes that could be in Russia, were they not for the palm trees. What they highlight most is the common cultural language of skaters on both sides of the Atlantic, beyond clichés and borders.

“I don’t like when people try to put a box ‘This is Russia,’ ‘This is America.’ It’s human beings, people around the world, different generations,” Rubchinskiy added. “When [people] meet, you can learn and it’s a good reason to meet.”