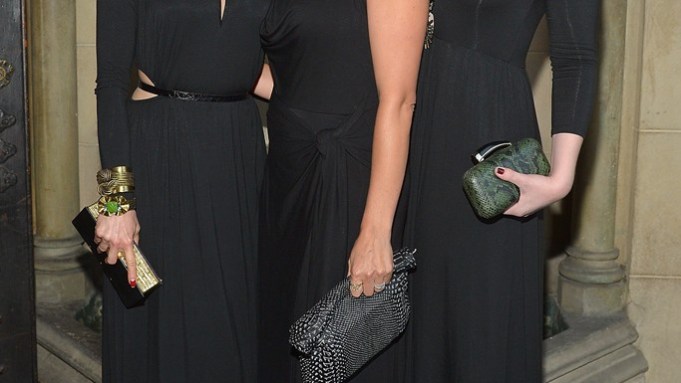 PALLY’S PALS: Rachel Pally threw a dinner at Chateau Marmont in West Hollywood, Calif., on Wednesday night to celebrate her fall collection as well as her 11th anniversary. “I had a baby four months ago, so nothing is more exciting to me than a girls’ night out with all these gorgeous women,” she said. Surrounding the designer were friends Michelle Trachtenberg and Dita Von Teese, who discussed the merits of the right undergarments to wear with Pally’s clingy jersey dresses. “The right bra makes a huge difference,” advised the burlesque queen, who has her own lingerie line. “Well, tonight I’m in my Spanx,” said Pally.

Trachtenberg was buzzing about her latest project, National Geographic Channel’s first scripted film, “Killing Kennedy,” based on the Bill O’Reilly book. “I play Lee Harvey Oswald’s Russian wife,” she said, flashing a photo of herself on set in a wig and tweed suit. “Rob Lowe plays John F. Kennedy and Ginnifer Goodwin plays Jackie, so it was a pretty cool cast. Even though it was 90 degrees in Virginia, I was psyched to go to work every day.”