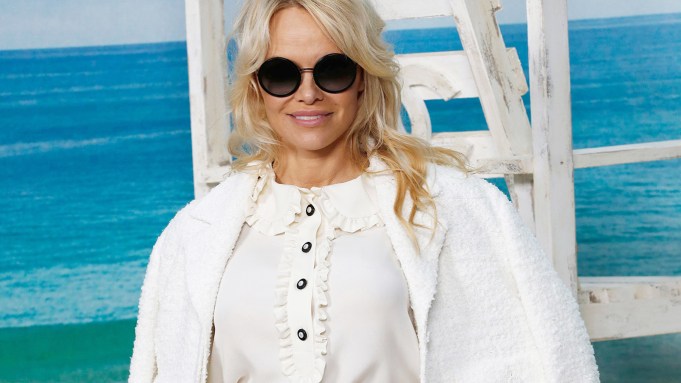 LIFE’S A BEACH: “I was saying: ‘Why is Karl looking for me? Why does he want me to be at this show?’ Now I realize, ‘OK, we’re at the beach,’” said Pamela Anderson standing on the sandy shore of the Chanel beach at the Grand Palais on Tuesday, waves lapping at her feet.

“It’s like home for me — either Saint-Tropez or Malibu, I love both,” added the actress, who is competing in the French version of “Dancing With the Stars.” “It’s killing me,” she groaned.

When asked where her bathing suit was, the “Baywatch” star replied: “Of course, I would have worn it if Karl had asked me to. I would do whatever he wanted.”

Making his way to the lifeguard tower, dressed in a Chanel logo polo shirt and denim shorts, a suntanned Brad Kroenig said he used to watch “Baywatch” when he was a kid. “It’s cool to get to play a lifeguard now,” said the model, adding that he felt like he was in Miami.

Moses Sumney, who is working on a new album, wasn’t dressed adequately.

“I got sand in my shoe, but I loved it; it was exfoliating,” quipped the singer, adding that he was still trying to work out “how they got all the water in here.”

Darren Star, the creator of TV shows including “Beverly Hills, 90210,” “Melrose Place” and “Sex and the City,” was in town researching his new series for the Paramount Network with the working title of “Emily in Paris.”

“It takes place in the world of luxury brands, and it’s about an American girl who unexpectedly takes a job in Paris for a French marketing firm, so she’s living in this world,” he said, gesturing around him.

“I’ve been to some shows, but it’s more also about an American being a fish out of water here in Paris, so I spent some time here myself, taking language classes and being that person, experiencing Paris from that American point of view,” he added. “What blows me away is just sort of the vision they have in terms of going beyond the idea of fashion…and how fashion is becoming entertainment in and of itself.”

Poppy Delevingne after the show said it was like “going to the most glamorous beach party of all time.”

The model is filming season two of Sky drama “Riviera” in Nice, in the South of France, based on the art world on the Riviera. “It’s murder and scandal and sex, it’s kind of bonkers,” she said.