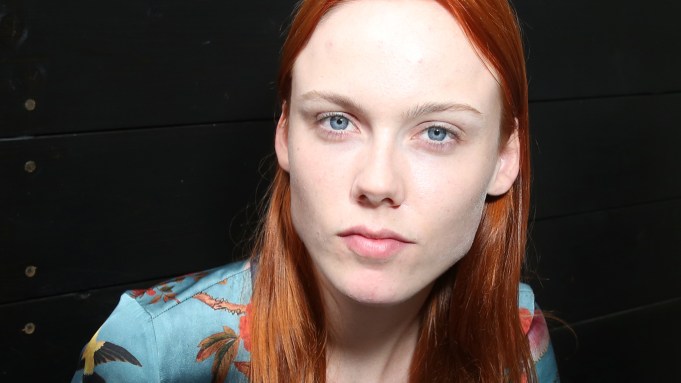 ’ZINE SCENE: The fifth and sixth releases of Willy Vanderperre’s 12-issue fanzine, called /12 that’s being done throughout one year in association with Idea Books, was celebrated in Paris on Saturday evening.

Fans of the photographer and the two models — Kiki Willems and Jonas Gloer — who feature in the editions flocked to the Comme des Garçons Trading Museum Paris for the event. That’s also where the publication was launched exclusively prior to being introduced worldwide and online starting July 1.

Just 300 copies of each issue are available, and every one in the series, each of which features one model — such as Julia Nobis, Clément Chabernard and Abbey Lee — has followed the same format. This includes a double-page spread shot with a flash of the person wearing makeup; a photo of a detail of the model, usually their ear, and a loose-leaf format. It’s almost Hockney-eque in its multifaceted perspective and approach.

“He builds a portrait of the person rather than the model,” said David Owen, a cofounder of Idea Books, which has worked on numerous projects with Vanderperre. Owen added that often there is a waiting list of 300 people for each edition of /12.

“I don’t think there is a photographer that is able to capture me as much as he does,” explained Willems of Vanderperre. She said in his photos: “I see everything that is behind my eyes. It’s very special.”

The model worked with the photographer on a Love magazine shoot almost two years ago.

“Willy has an open invite with us to do whatever he wants,” said Owen. “Unlike most other photographers [he] turns a lot of his ideas and desire to communication into products.”

Vanderperre is also sharing his images in an atypical fashion through the medium.

“It was very important for him that this was a fanzine; it was an ode to the person…of whom he is a fan,” said the stylist Olivier Rizzo. “[/12 is] a monthly celebration of the beautiful relationships that you can build with the people that you meet through your work.”

The issues with Willems and Gloer — a couple in real life — have been released simultaneously.