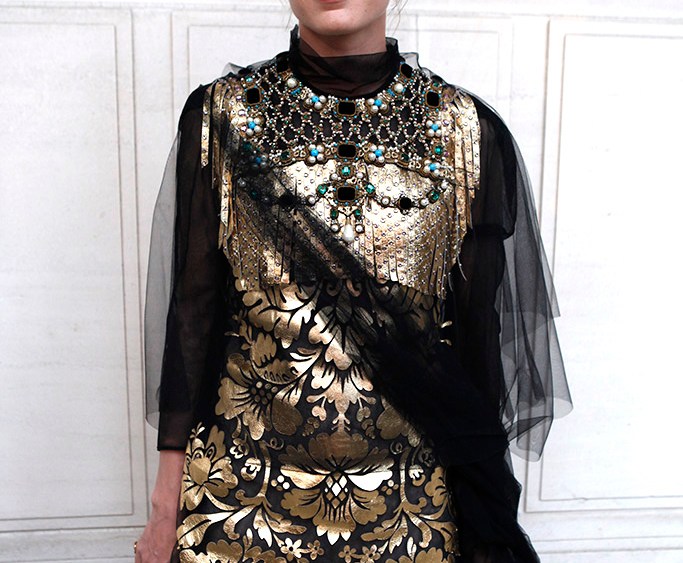 “I am just here today and then I am back to London tomorrow to shoot,” said Rampling, who wore Armani Privé. When pressed for further details, she called the film “a secret.”

Mahaut Mondino, the daughter of photographer Jean-Baptiste Mondino and fashion stylist Friquette Thévenet-Mondino, gave a singing performance. “I have known her since she was a child,” said Emmanuelle Alt, editor in chief of Vogue Paris, who sported Issey Miyake pants. “She rocks. She’s an amazing performer.”

Valletta, in Saint Laurent, had just returned from the south of France, where she attended the wedding of Victor Demarchelier, Patrick Demarchelier’s son, and Héloïse Guérin. “It was simple, beautiful and very chic,” Valletta Héloïse Guérin.

“I just popped in for this and the Valentino show tomorrow,” said Kravitz, who was in Saint Laurent, too. Lenny Kravitz and Lisa Bonet’s daughter had just finished a miniseries, called “Big Little Lies,” which was directed by Jean-Marc Vallée and stars Reese Witherspoon and Nicole Kidman. “It’s about a bunch of women who live in a small beach community.”

“I was dressed the same way last night,” said Elie Top. “I came here [then] because I got the wrong date.”

That made Catherine Baba laugh. “It’s like Christmas. He wanted to open his gifts beforehand,” she said.

Shayk, wearing Givenchy, said: “I love it. It’s so comfortable. It’s the perfect dress to eat and breathe [in].” Having just finished her last day of work, Shayk said she’ll probably head off to Italy next for a break.

Caroline de Maigret, freshly tapped as a spokeswoman and ambassador for Chanel, is writing her next book. “It is about women,” she said. “I’m making fun of myself.”

Poésy, who was wearing Chloé, said she has just wrapped the Italian film “Tito Il Piccolo.”

Meanwhile, Rossy de Palma is set to shoot a film directed by Amanda Sthers this summer in Paris. “It’s called ‘Madame,’ [and] is in English with Toni Collette and Harvey Keitel,” she said.

“I am working on my new album. It should come out in October,” continued Day-Lewis, dressed in Burberry. The son of Daniel Day-Lewis and Isabelle Adjani planned to continue his evening festivities at the Ritz Paris through till the wee hours. “There’s a party there. I went to the pool the other day because friends of mine have a suite there this week. I went swimming and to the steam bath. The hotel is very beautiful. They did a really good job at renovating it,” he said.

Thanks to the grant raised by the Vogue Paris Foundation this year through donations from 20 fashion houses including Balenciaga, Valentino and Gucci, Galliera’s director and curator Olivier Saillard was able to buy 600,000 euros, or $667,536 at current exchange, worth of clothes, photographs and illustrations for the fashion museum. Some of the acquisitions appear in the current exhibition “Anatomy of a Collection,” including pieces by Azzedine Alaïa, Martin Margiela and a Fortuny dress that had formerly been owned by Charlie Chaplan’s former wife, Oona O’Neill Chaplin.

The year before, the foundation had raised one-third that amount.