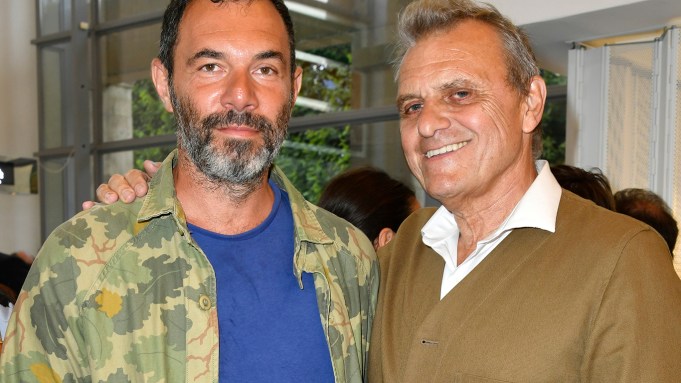 CHILLING OUT: A cool breeze whipped up the sandy ground of the Tuileries Gardens, much to the relief of guests gathered for a cocktail party organized by the Chambre Syndicale de la Mode Masculine on the second day of sweltering men’s shows in Paris.

Toledano has become something of a weather expert of late, what with Dior staging its women’s cruise collection outdoors in a California nature preserve, reprising its couture show on a rooftop in Japan, and preparing to celebrate its 70th anniversary with an event in Paris on July 3.

“They say it’s going to rain next weekend, but who knows what will happen on the Monday,” he said.

Boris Bidjan Saberi was among those who showed their collections earlier in the day amid a record-breaking heat wave.

“Basically, Ben Frost, the artist who made the music, his computers were melting, and everything was melting. I was really feeling very bad for everybody—not only for myself, but for the models, for the people who came to see the show. It was really disgusting,” he said.

The show featured a collaboration with eyewear maker Dita on a titanium frame that will go on sale at the end of the year. “It’s made by a fifth-generation craftsman in Japan and he makes the frames by hand,” Bidjan Saberi explained. “For me, it’s like a Porsche 911 Carrera – it’s really a masterpiece.”

Oliveira Baptista said Lacoste would stage its women’s collection in Paris for the first time on Sept. 27 to mark the 85th anniversary of the brand, which usually shows in New York. “We are also going to unveil a collaboration with M/M for November on polo shirts,” he said as he puffed on a cigarette.

De Castelbajac, meanwhile, has designed 40 looks for an imaginary fashion show for an exhibition of his drawings at the Mannerheim Gallery in Paris. Titled “40 Passages,” it is set to run from July 1 to 31.

The party on Thursday night was held at the Jeu de Paume museum, where guests were invited to tour an exhibition by Ed van der Elsken before heading outside to enjoy ice cream from an Angelina cart and take in a concert by Canadian saxophonist Jowee Omicil.