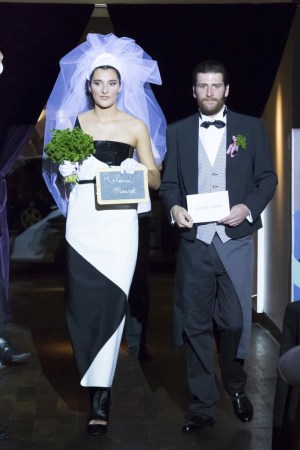 MEATY SHOW: It was the type of fashion show to which Lady Gaga, who once famously dressed in meat, might relate: Roland Mouret, Rabih Kayrouz, Véronique Leroy and Julien Fournié were among designers who paraded their interpretation of butcher’s work clothes at an event in Paris on Sunday night. The Confédération de la Boucherie-Charcuterie, the French butchers’ trade organization, and the French uniform label Bragard organized the show at the Alcazar restaurant.

Mouret, who as a young boy worked in his father’s butcher shop in Lourdes, France, did a black and white wedding dress, reminiscent of a butcher’s apron. In lieu of flowers, the bride carried a bouquet of parsley.

The independent Paris-based label On Aura Tout Vu sent out a women’s jacket, an apron and a cap. “We were interested in doing something feminine with these clothes that are usually very manly,” said the label cofounder Livia Stoianova. On Aura Tout Vu is working on a solo exhibitoin at the International City of Lace and Fashion museum in Calais, France, as well as costumes and decors for a production of “The Nutcracker,” slated for November 2014.

Models walking the runway were mostly real butchers, including some from the famous Hugo Desnoyer shop. A spokesperson for the trade organization described Desnoyer as the “Karl Lagerfeld” of butcher shops.