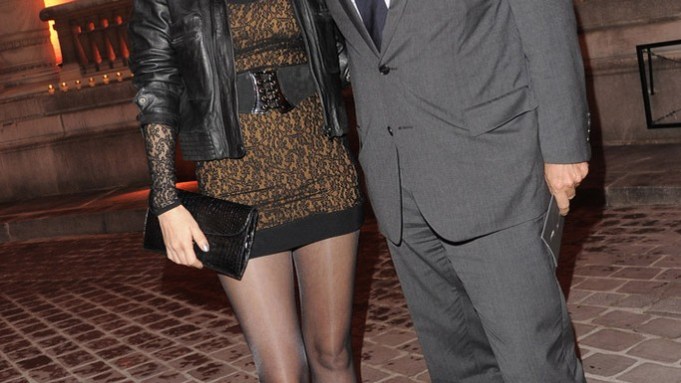 DRESS CODE: If ever an excuse was needed for Paris society to collectively don its extensive collection of Azzedine Alaïa frocks, Wednesday evening’s jam-packed opening party for the designer’s retrospective at the Musée Galliera was most definitely it.

Sporting a glittering black-and-silver number, Naomi Campbell inevitably got the flash bulbs popping. “I had it written into my contract for the production of ‘The Face,’ so I could be here with my papa,” the supermodel confided.

Campbell is currently working on season two of the reality-television modeling competition series in the U.S. and is launching the U.K. version today. She will travel to Australia to begin filming there in a few weeks.

“I wouldn’t miss this for the world. Azzedine has been the most loyal and amazing person in my life,” she said. “He’s the most unique designer in the whole world. What he’s done for the shape of women is truly amazing.”

Despite the grueling schedule, Campbell sees a similar vocation in her work on “The Face,” saying: “I’m happy to do it if it gives an aspiring model a career and a launch pad for getting a big contract with a big brand.”

Italian tenor Vittorio Grigolo waxed philosophical. “Azzedine is somewhere between angel and man, between the spiritual and material worlds,” he said. “His clothes are not just fashion, they are something that women protect themselves with.

“The vision of woman is something that interests me immensely. You cannot be a man if you don’t have a female side. I have asked Azzedine to create a men’s collection, with that little female side that protects you,” continued Grigolo. “I want to be protected, too! Maybe he will make opera costumes for me. He didn’t say no!”

Accessories designer Yazbukey set off her black Alaïa number with designs from her own collection. “The dress was a special treat for my 40th birthday last week,” she said. Meanwhile, Anouschka, known as Paris’ “Queen of Vintage,” was sporting an Eighties crocodile-skin jacket by the designer.