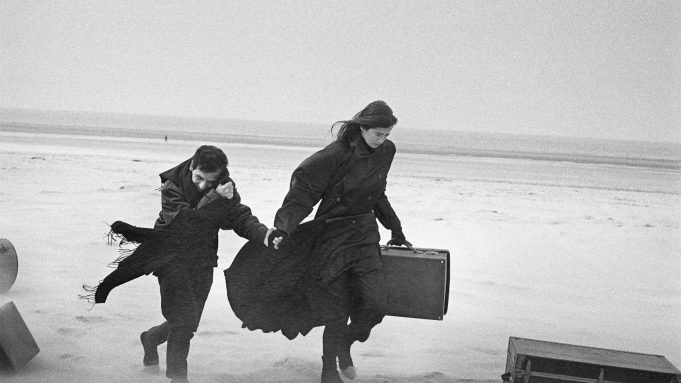 HAND IN HAND: A new exhibition in Paris spotlights the personal and professional relationship between Azzedine Alaïa and photographer Peter Lindbergh, whose images worked in perfect synergy with the designer’s sensual creations.

Lindbergh’s black-and-white photographs are displayed at the Fondation Azzedine Alaïa alongside a selection of the clothes featured in the shoots. On the first floor, a room is dedicated to singer Tina Turner, who often wore Alaïa stage outfits on tour and is pictured hanging off the Eiffel Tower in a skimpy beaded dress.

Most of the other subjects featured — including models Tatjana Patitz, Vanessa Duve and Marie-Sophie Wilson — are less flamboyant, though equally seductive.

“They were both portraitists,” said curator Olivier Saillard. “Since they were similar in their rigor — Lindbergh with his focus on black-and-white, Azzedine with his penchant for black clothes — they both loved beautiful women and wanted to spotlight their faces, and not to obscure or overshadow them.”

Lindbergh’s son Benjamin, who headed his photographic studio for 10 years and now runs the Peter Lindbergh Foundation, said the friendship between the German photographer and the Tunisian designer quickly evolved into a working relationship that lasted for four decades.

“They had a lot in common: two strangers arriving in Paris to follow their passion,” he said. “Each had great respect for the other’s work, and no desire to interfere. Azzedine asked Peter to photograph his collections several times, but he always left him carte blanche. He knew his clothes were in good hands.”

Alaïa himself once said: “Peter and I have known each other since I was starting out. We know each other very well. We don’t even need to talk. Everything flows.”

Saillard interviewed models, makeup artists and hair stylists who took part in the shoots for the pamphlet accompanying the exhibition, which opened on Thursday and runs until Nov. 14.

“Some of the anecdotes were very sentimental, others were more informed,” he said, noting that hair stylist Julien d’Ys, makeup artist Stéphane Marais and model Linda Spierings all commented on the timeless feel of the images they were helping to create.

The exhibition is one of five concurrent shows of Lindbergh’s work in Europe, alongside three in Italy and one in Portugal. An accompanying book is published by Taschen.