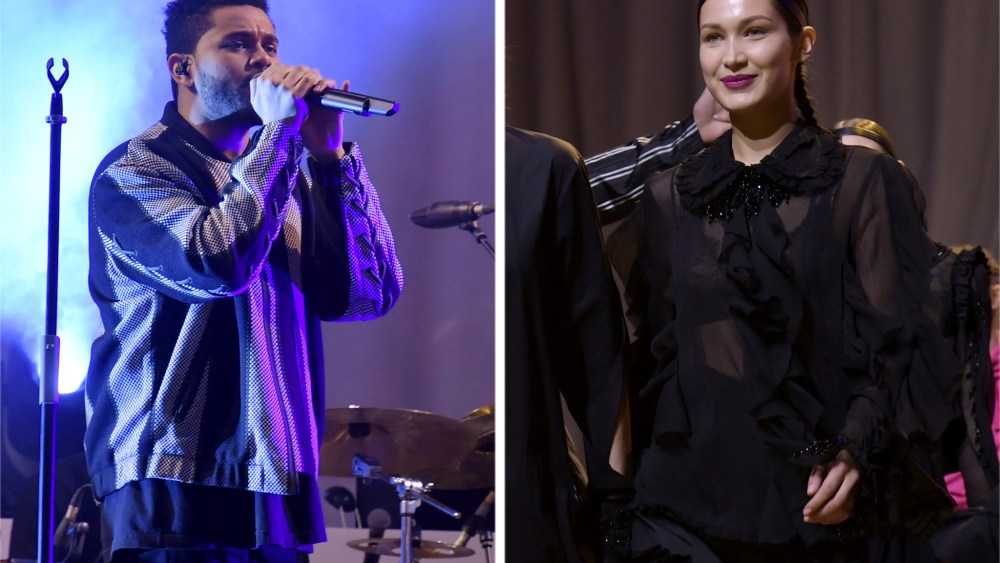 LOVE HURTS: Bella Hadid and The Weeknd were reunited for one night only at the H&M Studio show in Paris on Wednesday night.

Closing the see-now-buy-now display to the wrenching song “Without You,” the model blew a kiss with her hands moments before the singer, with whom she broke up last November, took to the stage for a live set.

Holding hands with her sister Gigi Hadid, she then led the models in a final lap of the Tennis Club de Paris, which ended with the entire cast – which also included Winnie Harlow, Malgosia Bela, Amber Valletta and Adwoa Aboah – partying at the foot of the stage as the singer belted out hits including “Can’t Feel My Face.”

The Weeknd – real name Abel Tesfaye – has teamed with H&M on a curated men’s collection, which hits stores today, at the same time as the H&M Studio collection. The “Starboy” singer has been spotted in Paris with his new flame, Selena Gomez, while Hadid has been enjoying family time, squeezing in a visit to Euro Disney with her sister before the shows.

It is the second time Hadid and The Weeknd have been reunited at a Paris fashion show since their split: In December, they appeared on stage together at the Victoria’s Secret display.

Joining in the dancing was actress Sasha Lane. “I love it. It has good vibes to it,” she shouted above the din. The “American Honey” star will next be seen in “The Miseducation of Cameron Post” opposite Chloë Grace Moretz. “We’re in post-production right now,” she said.

Meanwhile, Lucky Blue Smith and his sisters Pyper, Starlie and Daisy – a.k.a. The Atomics – were getting ready for the Coachella festival (they also happen to be the faces of the H&M Loves Coachella collection).

“We did a few shows to test our music, but this is by far the biggest crowd we’ve ever performed for,” said Smith, who came with his girlfriend, former Miss Teen USA Stormi Bree. “I’m excited and shocked, because Coachella is the biggest festival you can play.”

Also in attendance were Nicki Minaj, who swept in and out of her seat at the start and close of the show, Clémence Poésy, Gabriel-Kane Day-Lewis, Ana Girardot and Caroline de Maigret, who was working on her next book ahead of the London Book Fair, where she will be selling the rights to international publishers.

“I’m going to sign my contract and then we’ll see,” the Chanel ambassador said. The bidding promises to be fierce: Her first effort, “How to Be Parisian Wherever You Are,” topped the New York Times Best Sellers List.

Ann-Sofie Johansson, creative adviser at H&M, said the spring collection was inspired by a visit to Cuba, where the design team stayed opposite a dance studio. Their hair slicked back into tight braids, smiling models walked in outfits including crinkled track pants, pajama-style striped suits and paper-thin nylon windbreakers with ruched sleeves.

The palette of black and white was broken up by splashes of shocking pink, which was also used on men’s outfits like a trench coat or a track suit with a flower-embroidered back. It just so happened to be the same shade of pink as the “pussy” hats that have become an emblem of marches for women’s rights worldwide.

“Pink feels really like a good color. I mean, it’s on trend right now, and I think it’s a very strong color. It makes you feel quite strong, and for the guys, it’s a pretty color also, and it’s kind of a revolutionary color as well,” said Johansson. “I think it has become even more symbolic from when we started with the collection.”

Also featured in the show were thin intarsia knits emblazoned with the word “love” – the latest addition to the statement clothing that has emerged as a key trend this season.